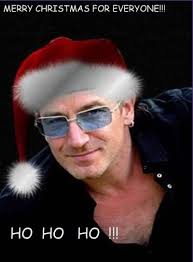 Now here is a song. Kept off the number 1 spot for Christmas 1975 by the phenomenon that was Queen’s Bohemian Rhapsody, Greg Lake’s acoustic song of fragile beauty was deemed a “secular carol.” I didn’t play the song for thirty years, dismissing it as an anti-Christ angle on the Christmas season with its,

“They sold me a dream of Christmas
They sold me a Silent Night
And they told me a fairy story
‘Till I believed in the Israelite.”

Then out of the blue U2 do a video version to raise funds for the RED Campaign. Now wait a minute Bono. You can redeem a lot of things but Lake’s atheist anthem?

Well they do. Changing the line to “But I believe in the Israelite” Bono neither loses his faith, in their cover version, nor the opportunity to use a song to make a powerful statement. When you are listening to U2 you take one thing as read; that they have thought through the song and their use of it. They never leave a line or word to chance in their very carefully crafted artistic intent.

U2 turn this song into a close relation of their own song Peace On Earth. They are asking what good this Christmas is to the millions starving or going without clean water or anti-viral drugs. It becomes a protest song in the Old Testament style of lament. When interviewed about the song, Greg Lake never mentions an atheistic agenda. For him it was a pronouncement against the commercial side of Christmas. The last line is the prophetic preacher’s punch and much more potent with the U2 cover version: -

What Christmas do we deserve? Is it the commercial madness, the material waste, the crammed ‘holiday’ schedules, the road rage, the gluttony and the greed? Or is there something else in there? Is there a heaven in there under the wrapping, tinsel and stuffing to be found in the midst of the hell? For me U2 have redeemed the song as they attempt to redeem the season and link the celebration of incarnation with the awful crisis of AIDS across the world.

Posted at 02:26 PM in ADVENT REFLECTIONS, Song Adventures In Advent, U2... Baby Jesus Under the Trash | Permalink | Comments (2)

This one just missed Slicer's recent list by a whisker. Love the way they redeemed the song, and particularly loved the change Angela spotted too. Just let down by a lacklustre performance on the Red vid (in my opinion). They should definitely redo this.