STOCKI SURMISES THE ULSTER RUGBY TEAM NOT WEARING A POPPY 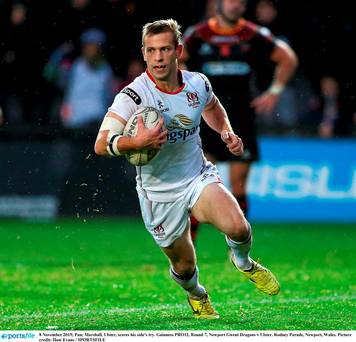 They sacrificed their lives for our freedom. That is what we believe. Those young men went to war so that we would be able to believe what we wanted to believe, think what we wanted to think and wear what we wanted to wear. Totalitarian states around the world, even up to this day, curtail free thought, freedom of religion and regulate life that is ordered from the top. The soldiers we remembered yesterday on Remembrance Sunday fought to keep us free from such authoritarian regimes.

Yesterday in Fitzroy we remembered our war dead; those from our wee Church who gave the ultimate sacrifice. As in my liturgy stated yesterday (read it here) I always surmise with poignancy who would have gone, and likely have lost their lives, had we been worshipping in 1914 or 1939.

Yesterday we welcomed new communicants, the same age as the youth who went to war a century ago. One of our teens sang a song from the perspective of someone who didn’t come home. As well as remembering the dead, we remember that war is not of God. We remember that are called to fight to make peace. We also asked if we are creating the world that those young soldiers fought for.

This morning’s Belfast Telegraph front page headline, that spoke of anger at the Ulster Rugby team who didn’t wear a poppy on their shirt, disturbed me in the light of what we remembered yesterday. It seems to me to be an assault against what our military died for.

The first memory I have of a sports team wearing a poppy on their shirt was when my beloved Manchester City did it, during Stuart Pearce’s reign. They sold the limited edition shirts after the match for the British Legion Appeal. I thought it was a great idea but it is a relatively recent and not in any sense a deeply engrained tradition. There were other English Rugby teams who didn’t have poppies on their shirts yesterday either.

There is nothing in the Holy Bible, the Magna Carta or the law of the land that demands a person, or a team, to wear a poppy. Indeed the bullying against people who decide, with the very free thought that the war was fought for, not to wear one seems to have taken us into the very fascism that the soldiers we remember by wearing one were fighting against. The same applies to sports teams, maybe more so, as individual players should also have the freedom to think for themselves. That the Ulster team happen to have a War Memorial at their stadium makes this an even more scurrilous piece of sensationalism.

When I led a minutes silence between the Last Post and Reveille yesterday morning in Fitzroy I was praying that the new world that our Fitzroy war dead gave their lives for would be full of tolerance and freedom and peace. That would be a more fitting remembrance than forcing traditions, no matter how worthy and good, upon other people.