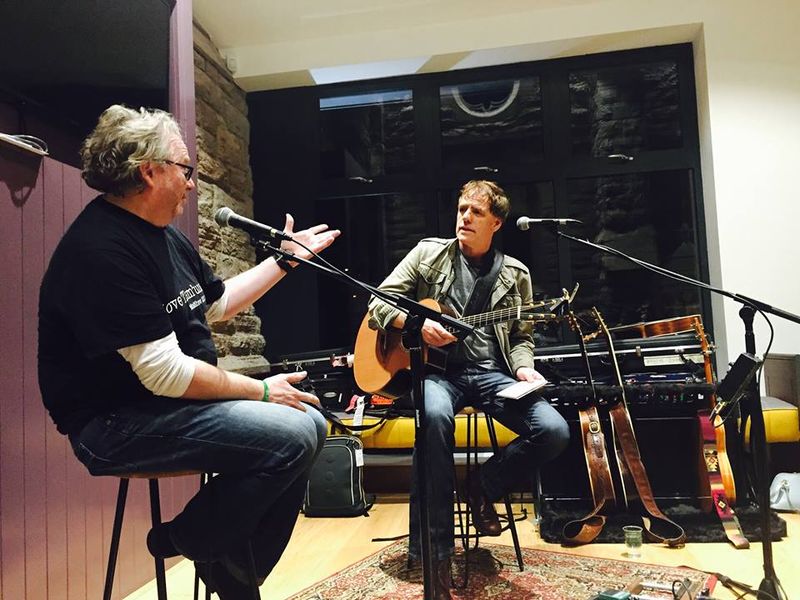 I was just a few songs into Martyn Joseph’s set at the Errigle Inn when I realised that I had already moved in my mind from writing a review to being involved in a therapy session. Martyn has said for years that songwriting is cheap therapy but it during this gig that I understood that the best writers are those who give cheap therapy sessions to their audiences.

This passionate and compassionate Welsh songwriter has been therapy for my head, heart and soul for twenty years. That Errigle gig had me thinking about children, parents, the male condition, the sad state of the world. Riven through every detail was this underlying strength of hope. A surprise outing for Sunday’s Coming, from way back on the An Ache And A Longing live record of 1989, gave some substance to my question as to where Joseph finds this hope, but throughout the evening he has constantly looks right into the eye of the world’s darkest most damnedest corners and somehow finds a hopefulness that shines redemptive light.

At the Errigle I was particularly struck by the juxtaposition of a song about his mother Her Name Is Rose and his old song about the Yugoslavian conflict, The Good In Me Is Dead. This is an outrageously good song and about an outrageously harrowing situation. A man at a border with his village destroyed waits for his mother. This is a very different mother/child experience than the one with his own mum. Powerful. Joseph explains that it is back in the set because it sadly fits so well with the refugee crisis in Syria and the pouring into Europe of such people whose good is being bashed out of them. It’s one of his gifts, to take big political issues and focus them in on the personal to one up the trauma.

But there’s more. Nowadays Martyn does not only sing and psyche his audience up to transform the world, with his challenging songs of humans' inhumanity. Before you leave the venue you can now have literally made a contribution to change. During Martyn’s experience of a Palestinian refugee camp in the West Bank, in which he wrote Cockburnesque Luxury Of Despair, he decided that he needed to do something about these unjust situations he has seen. He set up Let Yourself Trust to help fund small life giving projects. So on the way out, as well as buy the latest CD, you can contribute to a better more hopeful world! They have now funded projects in Palestine, Gautemala, Uganda and Swansea! For those of us listening to Martyn for many years it makes total sense.

The Errigle set list was weighted heavily on the new album Sanctuary. Of those Are You Ready, When Will We Find and I’ve Searched For You were instant Joseph live staples. The struggle of being human, vulnerable, believing, doubting, failing but seeking for something and reaching for love and peace and justice torpedo to your soul with quick fire couplets. Land Of Evermore is the only co-write with old partner Stewart Henderson on Sanctuary and on this one Stewart's poetry is particularly pastoral and of place in this remarkable lyric.

There were Springsteen covers of course. Land Of Hope and Dreams in Martyn’s acoustic setting becomes more personal than E Street’s big sound. His breaking down of One Step Up not only threw light on Springsteen’s genius but revealed most clearly why Joseph feels such kinship.

As if this was not enough the thirty five or so fans or songwriters who called into Fitzroy Church Welcome Area the next night at teatime for a Q & A got a few extra treats. In this setting Martyn relaxes so wonderfully and can be so intimate and giving. As I asked him about influences, inspiration and his journey of life and songwriting he made himself vulnerable.

How remarkable to hear Ballad For The Children Of Ireland from way way back in the early 80s, Don McLean’s Vincent and a version of Springsteen’s The Promise with help from Lydia Coates on smart phone shooting him up some lyrics!

His clues about songwriting were very helpful, the honesty to be true to yourself in what you write but still to keeping in mind your audience. It was wise and mature as indeed one feels Martyn Joseph should be at this time of his life. Those 180 gigs a year and all those records have given him a depth of knowledge of his vocation that he is happy to pass on.

So, 24 hours of soul therapy and political insight with a few lessons in art plus a few places on earth better off as a result. Hard to whack!

Thanks for this insight Steve
I met and worked with Martyn his most recent visit to the Middle East on the house rebuild in the West Bank
Please can you correct your piece above - Palestine is not Israel and it is extremely insulting to many many people to say so, even unwittingly.
Keep up the excellent reviews
regards

Thanks for this review - very similar set list at Canterbury last Sunday. The new album has pretty much been on constantly in my car since it arrived. "I searched for you" is a particular favourite of mine - if a candidate for Psalm 151 was needed it would get my vote....