THE IDOL OF BEING RIGHT; WINNING BATTLES, LOSING WARS 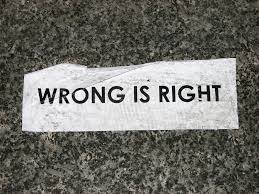 I have used an illustration very regularly over the last four days that I think needs some surmising as we deal with, what I have suggested before on Soul Surmise is, the god of being right. I am convinced that being right and standing for what is right sounds like the right thing to do but actually is a curse that can cause battles to be won on technicalities but wars to be lost for the grace and the Spirit of God.

It didn’t take headline precedence over Japan’s amazing World Cup Rugby Union win over South Africa but it was the most controversial sporting moment of last weekend. It was an 18” putt on the 17th green of a Solheim Cup match. The European team did not give the putt to the Americans, the Americans thought that the European team’s movements on the green suggested they had, the Americans picked up their ball and the Europeans claimed the hole. It can only happen in match play golf. In stroke play, the golf we see all year round, every shot has to be taken. In match play if you are close to the hole your opponent can tell you that they give you that putt and you can lift your ball.

If we go back to Sunday morning in St. Leon-Rot, Germany the whole thing became very messy. It would not surprise me that match play soon makes it a rule that all putts are finished off to prevent such a situation again. Anyway, the European player Suzann Petterson was technically right in claiming the hole and therefore the match. However, the spirit of golf and the sportsmanlike culture at the core of the game suggested something different. Though technically right by the laws of the game, Petterson might have responded to what was a miscommunication on America’s part and given the putt. They would still have been in the lead with one hole to play.

What happened next is a lesson on the dangers of always doing what the law sees is right and in not getting so caught up in winning the battle that you actually end up losing the war. After the victory that winning this hole gave the European team, they went into the afternoon singles with a huge lead of four points. It was reasonably guaranteed they should win. However, that wrong decision to stand for what was right changed the momentum of the Solheim Cup. Not only did the situation fire up a now angry  American team to play out of their skins but the uncertainty and embarrassment of the Petterson incident dropped the morale of the European team who were now playing with regret and the thought that even if they won the Cup that that incident would tarnish the victory. America won the war!

I have come to believe over thirty years in Church ministry and watching Northern Ireland politics that one of the main barriers to peace, reconciliation and indeed missional impact is our obsession with the idol of being right technically by the law rather than grace interrupting to transform lives, communities and nations.

On the hill at Stormont, the MLAs in our Local Assembly battle for what is right by the law. They put having the morale high ground at the top of their agenda. They then point the finger at the other and claim to be right. We are the good guys and they are the bad guys. We want to know who is to blame for this and to prove we were not to blame for that. Even when one side is proven wrong they suggest quickly that the other side is worse. In all of these scenarios, like the golfer Suzann Peterson, they might be technically right and win the battle but on the long term war for peace, reconciliation and a land of well being for all of our citizens they are losing the war. They are not working in isolation. Those of us who vote for them vote for them to stand for the idol of being right!

It is the same in many of our Churches. Much of my week is currently spent in Churches where relationships have broken down and where the name of Jesus and all that he lived, died and was raised to life for is taken in vain. It is an insult to His Gospel and a hindrance to His Kingdom. Many of those, sometimes on both sides of the argument, are technically right by the law but they are wrong in not living out the grace of God’s Kingdom. They are trying to win their wee petty battle but losing the war.

The Pharisees were Jesus great opponents. The battles between Jesus and those religious leaders takes up a good deal of the four Gospels in the New Testament. The Pharisees get a bad press and often times that might be fair. However, they were always right and never wrong by the technicalities of the law. Jesus was interrupting the technicalities of the law by his grace because he knew what Paul would later write, “For all who rely on the works of the law are under a curse, as it is written: "Cursed is everyone who does not continue to do everything written in the Book of the Law.”” (Galatians 3:10).

So, I keep praying for our politicians that they would get away from the idol of the god of being right. Start to do what seems technically wrong in order that we might win the war of peace. Don’t be all delighted when you win the 18” putt legally but then set in motion the losing of everything. See the bigger grace filled picture.

To Churches too. Let us bring the Spirit of God into play. It is not like the human default position. It is not about always being right. It is about always being like Christ who continually smashed the Pharisees technicalities for a much greater cause. As Paul put it, “You, my brothers and sisters, were called to be free. But do not use your freedom to indulge the flesh; rather, serve one another humbly in love. For the entire law is fulfilled in keeping this one command: “Love your neighbour as yourself.” If you bite and devour each other, watch out or you will be destroyed by each other.” (Galatians 5:13-15)

Now… are we going to do what’s right and claim that hole… or… do something better than being right!?

By the way… because in Northern Ireland you have to say what you don’t say as well as what you do… I am not saying here that we should ALWAYS be wrong. Don’t be daft!