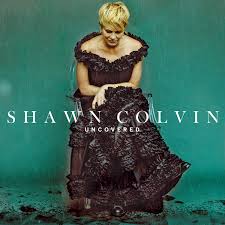 In 1993, with a couple of Daves, I drove across the United States from Reading California to Upland, Indiana, to the best Ice Cream Parlour in the known world - Ivanhoes (don’t ask!)! During that trip one of my most played records was Shawn Colvin’s Fat City. It was just released and I loved it. I remember spending a couple of evenings with the late Rich Mullins, during that same trip, arguing that it was a better record than Colvin’s debut Steady On. I wish Rich was still around to argue with and who knows I might even concede he was right.

Whatever, Shawn Colvin was a major player in the mid 90s. Her next record was a covers record, Cover Girl, and I remember being disappointed that we didn’t get new Colvin songs but her covers of Tom Waits, Jimmy Webb, Bob Dylan, Robbie Robertson and Steve Earle couldn’t be argued with!

I have to confess that I don’t own Shawn Colvin’s last record All Fall Down. Personally, I don’t think Colvin has ever reached the heights of those two records that Rich and I argued over. However, after twenty years of apathy, Colvin has got my attention again. Her new album is another album of covers. It is quite the collection of songs. It is beautifully imagined. It is exquisitely put together.

The success is the choice of material. Uncovered is chock full of top notch songs, some of which we knew about and some maybe not so much. Colvin loves Tom Waits and this time she takes Hold On and raises it to sit beside those two top Waits tunes from the 1994 version The Heart of Saturday Night and Ole 55. She lifts Graham Nash’s I Used To Be A King and makes it sound as perfectly crafted as any of the Crosby, Stills & Nash classics she could have done. Robbie Robertson’s Acadian Driftwood is revealed as as brilliant as The Band’s staples The Weight or The Night I Drove Old Dixie Down. Stevie Wonder’s Heaven Is Ten Zillion Light Years Away had me investigating a Stevie Wonder record that I’d never much heard of!

That Stevie Wonder song was what most caught my spiritual ear. It is not as theologically sharp as it is in the cut of its challenge:

"Where is your God”

That's what my friends ask me

And I say it's taken Him so long

Right throughout the album Colvin does, what she claims to love to do, throws a female hue across songs written by men. Springsteen’s Tougher Than The Rest is a case in point. It is more vulnerable and maybe actually tougher in Colvin’s hands. For me the song that brings out most from the Colvin light shone deep within it is Gerry Rafferty’s Baker Street. Washed clean of its saxophone solo, brilliant and all as that was, the song gets a new edge:

“This city desert makes you feel so cold

It's got so many people, but it's got no soul

And it's taken you so long

To find out you were wrong

When you thought it held everything”

Just after the 1994’s record I went to see Shawn Colvin in Dublin. Near the end of the gig her plectrum hit the floor and I was close enough to reach out and grab it. When she came back for the encore she explained, with a sly grin, how she needed a plectrum for the next song but seemed to have misplaced hers. She looked into the crowd, straight at me, and I handed her her tools of work! Song over and Colvin looked back down and with a smile she thanked me and reached it back. It has pride of place in the front of the Cover Girl CD to this day. Maybe as I hand her back her place in my affections through a covers record she’ll now reach back and make two essential records like Fat City and Steady On. In the meantime I am loving this!