SURMISING A TWELFTH CELEBRATED WITH GRACE 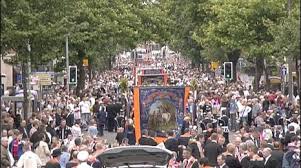 I remember the arch going up. My grandfather put it up. Right there in the middle of Galgorm village, right outside my Grandparents thatched cottage. It was a moment in the year. I loved seeing the village landscape change and got so excited when my dad would drive under it for the first time.

At almost the same time my dad put the flag out. There was a flag holder by the bedroom window and at the start of July up went the Union Jack. All the neighbours did the same. Maine Park was ready for the Twelfth Day.

I would decorate my toy golf club with red and blue tape. It would be criss crossed carefully and we might even add a wee tassel. It was then transformed into the drum major’s band pole which we twirled through our legs and twisted round our necks and threw as high as we could. Who could throw it the highest and catch it with one hand. Just one hand! I loved it and threw it pretty high! The leader of Staffordstown band at the time was the best twirler and thrower; who we all pretended to me!

The Twelfth would be a carnival of sorts. My Grandfather marched with his Orange Lodge and we stood by the side of road waving at who we knew and waiting for Granda to walk by. Maybe some day I might get to carry the strings from the banner at the front of the lodge.

I moved house in 1969. It was more middle class. No flags! None of my friends threw the pole. At the same time The Troubles started raging and all of the innocence of the above turned a little more sinister.

What am I surmising? Well, the first thing is that none of the above was in any way wrong. It was a cultural thing. I was unaware that it had anything to do with sectarianism or hatred. I even had Catholic friends who came to watch the parades too.

Something and some folks hijacked this cultural summer high. When arches and flags go up today and when bands march in certain places there is a different feel, a different intent. I am in no way trying to condone the actions of some who are using the carnival, I so enjoyed, to mark territory and stoke tensions. It is not right, not civil and certainly not Protestant!

Yet, I am asking us to stand back, stop for a moment and consider. For many of our Protestant Loyalist communities the Twelfth is still a cultural and neighbourhood event. The young boys love collecting for the bonfire, the young men love the discipline of the bands and can play some good tunes while marching. They love their band uniforms. The arch and the bunting all adds to the colour, flavour and excitement.

Such communities should be allowed to enjoy their summer festival time. Let us be careful that we don’t just see the thin veneer of very wrong motives at the top of the Twelfth celebrations and lose the joy that communities have underneath it.

Yes, we do need to ask about the way the flags are used. When a flag is used to intimidate then it is being used wrong. When a band plays insensitively in Catholic areas or outside Catholic Churches we should make it known that they are wrong and are bringing into disrepute the very Protestantism they are claiming to defend.

Barack Obama, in his eulogy to Rev Clementa Pinckney in Charleston this week, spoke about the confederate flag and how it is being used in a wrong way to incite fear and hate. He most beautifully and powerfully brought the great Protestant theology of grace to bear on it. It would be an act of grace to bring it down where it offends neighbour, he preached.

I look back on my days in Galgorm with fondness. Every marching band I see I watch how high the pole is thrown and think of Staffordstown band in 1968! If done in a way that is steeped in grace then not only should our loyalist communities have the right to celebrate their Twelfth but that grace will be the power house that will cause them to celebrate with all their might but gently towards their neighbours.

Let us pray for community leaders, Church leaders, band leaders and political leaders who can steal back what is a right and a wonderful part of Northern Ireland’s rich tapestry of culture. Love your culture and when you love the God of your culture you will love your neighbour, and even your enemy, in the way you march, fly flags and light bonfires. Enjoy the Twelfth!