RETHINKING THE NATURE OF THE WORLD 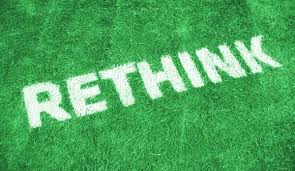 An old blog but still as vital as when it was written... I can see my former students all smile... he's at it again...

"In your old life you had nothing to live for. Now you do. You have nothing to lose and everything to gain. Go clear the land for a new culture...If you are not spending every waking moment of your life radically rethinking the nature of the world - if you're not plotting every moment boiling the carcass of the old order - then you're wasting your day."

What inspirational words. "If you're not spending every waking moment of your life radically rethinking the nature of the world...then you're wasting your day." Do those words not make you want to rush out the door and go change the world? Could we not do with rethinking the nature of things? Should we not be about boiling the carcass of the old order?

These are words of rebuke, in that I feel as I read them that indeed I have been wasting my day, and yet the rebuke comes with a motivating sense of encouragement to just go and stop wasting anymore time. If there is still a reason for that Sunday morning ritual of climbing pulpit steps and preaching down to a congregation then these are the words that should be preached. I long to sit beneath that pulpit and hear these words fill me with energy and to head home to Sunday dinner with enough strength to be part of their revolutionary implications.

And yet I have climbed those very steps and spoken those very words and been distraught and confused that such words should be making those who sat before me uncomfortable. There was no sense of urgency about the fulfilling. No sense of excitement at the possibilty. Yet surely these words capture so well the whole concept of what Jesus was on about when he told us to go and bring in the new Kingdom.

Yet these words did not come from the houses of God but from the pages of a modern novel; Douglas Coupland's Girlfriend In A Coma. Coupland, most famous for his novels Generation X and Life After God, writes with a very direct preachiness. He makes no claim to a Christian commitment but, though his other books are concluding a general thiestic worldview, "Girlfriend..." leads him to the very edge of Christianity itself.

It is about the ills of modern society, the healing and redeeming of such and the saving of souls. Briefly Karen falls into a coma in her high school year. Before doing so she has an apocolyptic vision of the future. She tells her boyfriend, "It was just us, with our meaningless lives. Then I looked up close...and you all seemed normal, but your eyes were without souls".

Karen becomes the girlfriend in the coma and misses seventeen years of her life before. Though the book deals with the changes from the world she fell asleep in, in 1981, to the world she wakened up again in, in 1998 (she misses out on Princess Diana entirely), it is about the lives of her friends and the fufilment of Karen's vision, when they become the only people left on planet earth.

Another old friend who died in his early teens, Jared, appears as a friendly ghost, who reveals to them their "deep down inside" ills and redeems them. It is then he says that they can get the world back but only if they decide too. "You're going to have to lead another life soon; a different life. You can get the world back yet" and so to the climactic words at the top of this article.

So what of us the pew sitters? What are our expectations of the sermons we hear? What are our perceptions of what it is to follow Jesus into turning the world upside down with our prayer "Your Kingdom come, Your will be done on earth as it is in heaven."

On Sunday mornings it might be good to sit in our Churches out of a very commendable spiritual habit, committed to our liturgies and creeds whether traditional or modern. Indeed we may seem normal but we could be eyes without souls. Just there, going through the motions and not "spending every waking moment radically rethinking the nature of the world".

Paul told the Romans to avoid being conformed to the pattern of the world around them and be transformed by the renewing of their minds. He told the church in Galatia to put off the old self, to be made new in the attitude of their minds and put on the new self, created to be like God. What that might be like in Northern Ireland is what our radical rethinking needs to get to grips with? Jesus gives us the fodder for our minds to chew on.

In a world of materialistic obsession we need to radically rethink the nature of the world and store up for ourselves treasure in heaven instead of on earth.

In a country where hatred and pride has divided us into a murderous society we need to radically rethink the nature of the world and love our enemies and do good to those who hurt us.

In a world where outward religious duties like quiet times and sound theology have become the mark of a spiritual life we need to radically rethink the nature of the world and be salt and light to the homeless, the prisoner and the hungry.

In a world where the first are first and the last are last we need to radically rethink the nature of the world and create a world built on grace where the last become first.

Nothing wrong with one or two of those things but maybe there is nothing much right with any of them. It is not what Jesus meant when he said "follow me". No, let Jesus words "follow me" put eyes into our souls. Let the Holy Spirit fill us with vitality, inspiration, and the ability to wrestle and struggle. Let us put our hand to the plough and risk it all. For what? For another world, radically rethought. For another world with a new nature. Another world where this one is turned upside down and we live for the Kingdom of God.

So every morning before we leave the house let us ask God to remind us - "If you are not spending every waking moment of your life radically rethinking the nature of the world - if you're not plotting every moment boiling the carcass of the old order - then you're wasting your day."