Home Archives Profile Subscribe
A RECORD THAT CHANGED MY LIFE...
SURMISING A TWELFTH CELEBRATED WITH GRACE

A TRANSFORMATIONAL SONG FOR BELFAST - CHRISTY MOORE (& U2) 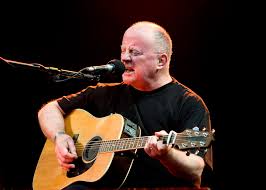 Tonight Christy Moore headlines the Acoustic Stage at Glastonbury. A repeat blog in honour of that...

The coming together of Christy Moore and U2; that is an imaginative thought in itself. When they finally got to write together a song about the Irish Troubles came out. Actually not so much its Troubles but more Ireland’s peace process.

U2 released it first on the B-side of Staring At The Sun. In their hands it is like a mature older brother of Sunday Bloody Sunday, quieter, ambient and deeper. Sunday Bloody Sunday was an innocent almost naive first cry from the heart on the Irish problem. North and South is more measured and cerebral; it comes with years of thinking and more awareness of the complexities, the conditioning, the fears and the courageous decisions needed to “turn history around” as a theologian once described “repentance.” U2 played it live only once and that was on an RTE Late Show for the victims of the Omagh bombing 1998.

Christy Moore eventually released the song on his King Puck album and Christy has had the song as a regular feature of his live show ever since. The definitive version, for me, is Moore’s version on his Live At The Point 2006 album. On this version Declan Sinnott’s lonely electric guitar sets the song apart, giving the whole thing a serious ambience and weightiness. On top of Sinnott’s genius, every line has an image that takes you back and forth and forward and back. It’s a song based in the premise of division but then reaching out across that metaphorical river to understand, to confess, to repent and to be changed into a better day.

The song is about the desire for a new day when the two sides will reach for each other, find companionship, empathise with each other and stand side by side without either side having to give up the best parts of their identities. The lines, “I want to meet you where you are/I don't need you to surrender,” are a provocative play on the Protestant slogan No Surrender!

The song lends a robustness to this idea, an idea unthinkable twenty years ago and still a brave choice today. Though coming with that weightiness of Sinnott’s electric atmosphere there are chinks of hopeful light, “There was a badness that had its way/But love was not lost/it just got mislaid” or as U2 sang on The Late Show, “love will have its day.” There is a spirit of regret for “hurting your own.”

There is a sieving of those things to be kept and those things to leave behind in the new day and Christy’s voice makes you really believe that that day is here and to go out and walk in it. There is something about great songs when they are written and performed about your home that creates an emotional energy and this song does that. It is a clarion call of hope for tomorrow without ignoring or dismissing  the painful past. It is not glib to call it prophetic.