A RECORD THAT CHANGED MY LIFE... 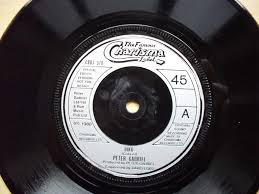 A few years ago I was asked to speak at the Oh Yeah Music Centre in Belfast about my favourite protest song. I have so many but the one I chose was one that I can look back and realise that it actually changed my life. It isn't even by an artist that I am a big fan of. However, Paul Simon's version on the Peter Gabriel covers album And I'll Scratch Yours is more my style. I thought of this song again a few weeks back when I was on a panel on Sunday Morning With Ricky Ross on BBC Radio Scotland about the power of song.

I am suspicious of the modern rock band that suggests or even pontificates that music cannot or should not be a transformational force. Noel Gallagher, the seemingly more intellectual of the Oasis brothers (!!!!!), has said that he can only change things every five years in Britain, when he votes. Asked why he didn’t write political songs Alex Kapronos from Franz Ferdinand spoke of going to gigs by political bands who told him what to think, “And really early on I got sick of it. And I said to myself I might as well be going to a Christian rock gig here, with someone telling me what to think. So when I was still a teenager I decided I didn’t want to tell other people what to think from a stage; it’s not my place.” So what does art do Mr Kapranos? When you were at Glasgow school of art you didn’t think that your art had a message?

Personally I am very glad that Peter Gabriel didn’t fall for the flakey, vacuous approach to art that Oasis and Franz Ferdinand espouse. Though, it was far from a Damascus Road conversion, and I was very slow to realise it, Gabriel’s song Biko profoundly changed my life and the lives of many that I have had the privilege of engaging with. Released in 1980 and written about South African Black Conscience leader Stephen Biko, Gabriel tells the story of Biko’s inhumane treatment by the racist apartheid government’s police force and how he died in a Port Elizabeth prison in 1977.  Though it failed to set the pop charts on fire, this haunting song has over thirty years become a slow burn of an anthem for justice not just in South Africa but all over the world. In 1988 Gabriel took it around the world in an Amnesty International concert that also featured U2, The Police and Bruce Springsteen. He also performed it at the Mandela Day concert in London that was a major force of pressure on the South African government to release Nelson Mandela. My favourite version of the song is the performance at the 46664 Concert in Cape Town in 2003 when in an Aids Awareness gig Gabriel got to play it on the redeemed ground of South Africa, where Biko’s death was now celebrated as a sacrifice that brought a brand new rainbow nation.

I cannot remember the first time I heard the song. However, it is my earliest memory of developing an anti-apartheid awareness. In July 2002 in a Church on the Guguletu township on the Cape Flats of Western Cape I was asked without warning to explain to the congregation why I had brought 25 white Irish students to worship. In the few seconds I had to make my way to the pulpit I had to think very quickly what had brought me here on my journey in order that I would think it a good idea to a gang of young people along with me. The answer opened up a profound truth to me. I wasn’t there because I had heard about the injustice of apartheid from the pulpits of my Presbyterian Churches. I told the congregation that I was there because rock musicians like Peter Gabriel had sparked a Biblical passion for justice in general and their people in particular and that these rock prophets had profoundly changed my life. I went on to tell them that though many of the musicians were not Christians they forced me back to the Old Testament prophets and I was there with my students because we wanted to bring God’s Kingdom to Cape Town as it was in heaven.

It changed my life in that it fuelled with many other God induced serendipities to become involved in the transformation of South Africa. I became part of Habitat For Humanity’s house building programme in the Western Cape which has been one of the most privileged and moving episodes of my life. Along with my students we raised funds and physically helped to build 40 houses for former shack dwellers. When you hand people the key to their first brick house it is an amazing feeling. As well as Habitat For Humanity my student teams got to engage in Peace projects, AIDS visitation, school projects and a Fair Trade initiative. It did not change the entire world in an instant but it did change the world a little, bit at a time.

As well as all of that, my students came home transformed and many changed their vocations or became campaigners, changed the way they looked at the world and led other such teams themselves. I can think of three who have spent time in Africa this year as part of their work, one of whom Justin Zoradi having set up the charity These Numbers Have Faces that helps township youth to get to college. So I am thankful that Peter Gabriel did not have the defeatist attitude of Noel Gallagher or Alex Kapronos and think protest songs were useless and couldn’t change the world. Biko and many other songs have proven life changing to me and many others.

Isn't there a difference though between believing you have a message worth sharing and insisting that others agree with it? Maybe that is where Alex is coming from?

Art has great power but when it insists on saying this is what you need to think then it loses that power. I think where Alex is coming from is when it become militant and so actually turns people away from engaging with ideas that may challenge them.