U2 LIVE IN VANCOUVER 14.5.15 - SONGS OF INNOCENCE AND EXPERIENCE TOUR 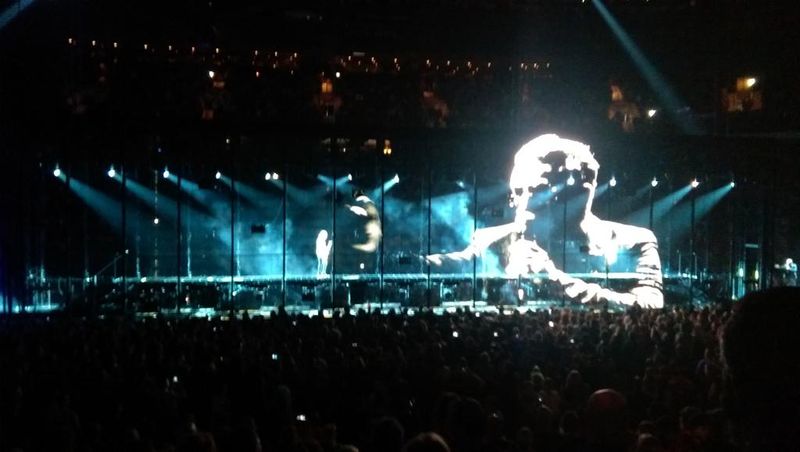 Who am I to think that I could review U2’s first gig on their Songs Of Innocence and Experience Tour from 4,400 miles away? Well, who did I think I was to write Walk On; The Spiritual Journey of U2 without access to the band!? And I got away with that one. For some reason I, who was not top of the class in English comprehension, can decipher the intentions of this rock band and more times than not get it right. Maybe it is as close as I, a Presbyterian, gets to being a charismatic speaker in tongues!

This morning I have followed the Tweets, the Facebook Statuses, the set list and Neil McCormick’s review and tried to make sense of what U2 are going to try and do, over the next year or two, with this piece of performance theatre. Be sure that a U2 concert is not just about choosing the best songs in some appropriate order. It is about a lot more than selling albums, though never underestimate their desire to do that too!

I have never been confident about what U2 songs are about, or at least the fulness of their depth, until I see where they place them and how they perform them in the live setting. The disappointment of the No Line On The Horizon record was also played out in the 360 Tour when they seemed to lose confidence in the songs from the album. For sure that then played into the original intention of the Tour and led to what I would say was the least satisfying overall effect tour in a long time - much as I enjoyed it!

Last night there seems no lack of confidence in Songs Of Innocence. No less than eight (and a wee snippet of California) of the album’s tracks slotted in to the set list. For me the surprise was the absence of Volcano which I felt was only chosen ahead of Lucifer’s Hands on the first disc of the album because of its potential live assault.

Some observations on the new songs. Kicking off the first set with The Miracle(OF Joey Ramone) makes sense in sound and story. The first set seems to be about the band’s youth and following the song that sent them as “pilgrims on our way” with two tracks from their first LP Out Of Control and I Will Follow with Vertigo in between - Perfect

Iris and Cedarwood Road together is also obvious. The first is the loss of Bono’s mother, which must have taken on even more poignancy a day after Larry buried his father, and the second is about the friend (Guggi) and family (Rowens - “an Old testament Tribe”) where Bono found solace, calm, hope and a Bible that would lead him on a redemption road. Song For Someone about Ali, his wife, whom he met at that same time and who would be his soul mate down that road,  was another incisive next move.

Then it was into their divided island. Raised By Wolves and Sunday Bloody Sunday, still not rebel songs, work together on a few levels. They are about two dark and violent days in Irish history, the former involving their good friend Andy Rowen. A snippet of Psalm 23 in Raised By Wolves is a deft but not surprising spiritual touch. From there into the soul melt of Judas and Until The End Of The World raises the drama. The spiritual is raised too as at this stage it would seem that Psalms rained as confetti over the audience along with pages of Alice In Wonderland, Dante’s Inferno and other literary works.

The first half ends with friction and division in Bono’s family life, Northern Ireland in the spiritual realms between Jesus and Judas. The second half begins with reconciliation. This half through the encores seems to be built around Invisible. That is again no surprise to me. Over a year ago, speaking about U2 in America, I was suggesting that its “There is no them/There’s only us” mantra would be significant in future U2 gigs. The song kicks off the second set and gets a reprise right at the end of the last encore I Still Haven’t Found What I’m Looking For.

I am as yet not so sure about the juxtapositions of songs in this second half and wonder if this half will see more change as the Tour continues. We will see! Ending with the the hymn-like Still Haven’t Found also makes sense. U2 usually like to end with a spiritual depth charge as their congregation heads out into the night. That they are speaking about reconciliation that they still haven’t found preaches a continuation of the mission!

The next thing to investigate will be how the second night shimmies and shifts. Two things to watch for that they hadn’t considered before they came off stage last night. One, Edge will not stray outside the yellow lights. Indeed, let us hope he doesn’t waken up with an injury that causes cancellations. Two, BB King’s passing away will be sure to get a mention tonight. Expect perhaps a hasty rehearsal in the Rogers Arena this afternoon of When Love Comes To Town! Remarkably Pope John Paul ll died just three shows into the Vertigo Tour in 2005 and got a mention in Anaheim on Date 4.

I haven’t even got to the visuals. It has to be remembered at a U2 concert that as well as the best band in the world we are dealing with the very best lighting and stage designer. From the photographs around social media, the lighting genius that is Willie Williams with the theatrical design wizardry of Es Devlin seem to have hit the ball out of the park yet again. Neil McCormick’s review for the Telegraph puts it well, “The staging was extraordinary, using every trick in the rock-show handbook and then adding a few more.” Those with tickets for the Tour ahead must be excited this morning. I ain’t got one yet! We’ll see!

So there it sets off. Where it goes no one knows but I believe we have a pretty well pointed direction. Now for the Songs Of Experience record to appear in our iTune accounts to transform set 2! We wish!

I was at the Friday show in Vancouver and I felt overall the show had more power & intimacy than the 360 tour. It felt like we were immersed in U2's family/culture/and ultimately a connection to God & prayer. I'm in the midst of creating a new syllabus for a college course I teach entitled Pop Culture and looking for a good artifact (CD) for my students to exegete. I've avoided using U2 as they would be easily overwhelmed. In the past I've used Mumford & Sons and Civil Wars. Any suggestions that would give my students a great exercise in the exegesis of culture?

Gary, check out Foster The People.