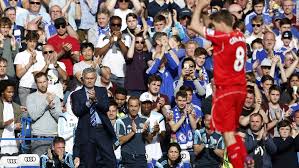 I think Stevie Gerrard got it wrong. When asked about the standing ovation he was given by Chelsea fans as I walked off the pitch on what was likely to be his last game at Stamford Bridge he dismissed the gesture, pointed at how the Chelsea fans had “murdered me for years” and how he was only interested in the support of the Liverpool fans.

I am a big Stevie Gerrard fan. I believe him to have been one of the best players to have graced the Premiership. I have a soft spot for players of peripheral vision, who can play a 70 yard pass onto a six pence and score goals from midfield. I have admired his commitment to his hometown club, giving up the opportunities to go across Europe and win more medals in order to be loyal. I love his attitude that a medal at the club he loves, “among my people”, is always worth more. That is a rare allegiance in modern day soccer. Oh that he had been with Manchester City for 27 years!

Yet yesterday he disappointed me. To dismiss the Chelsea fans so out of hand was in itself disrespectful. Of course they had murdered him for years. He had refused to sign for them back in the day and the rivalries between the two clubs domestically and in Europe in recent years has been fierce.

So, that a Chelsea crowd should show him the respect, in spite of all of that, was quite a statement. I am no lover of Chelsea. I have no love for their manager, I do not like the dull way they go about winning matches and Premierships but this was a moment against the current uncivilised behaviour of soccer fans towards rivals or former heroes who return with other clubs. Gerrard needed to give credit where credit was due and like an ungracious speech after an Election result he missed an important moment.

My fear is that such a reaction will not encourage such magnanimous gestures again. We are trying to make football a more sporting sport, particularly among vociferous fans and Gerrard’s poor response to Chelsea fans will rightfully make them think twice before they do it again. That disappoints me. I feel Gerrard had a prophetic moment that could improve the game he loves. He should have embraced it, enjoyed it and shown the same respect to Chelsea fans that they did to him. Well done Chelsea fans!

What would you expect from a pig but a grunt. Like you I have no love for Chelsea but their gesture towards Gerrard was a great way of bringing respect into the game, his rejection of said gesture will do more harm that Gerrard can ever imagine.