Home Archives Profile Subscribe
YOU ARE NOT SAFE...
BRANDON FLOWERS - THE DESIRED EFFECT 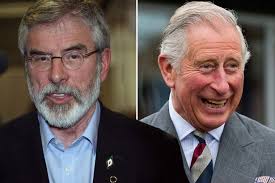 As the news breaks that Prince Charles is going to meet Gerry Adams today there will be much consternation. That consternation will be on both side of our traditional, often times violent, bloody and murderous, divide.

Ulster Unionists will feel that this is a betrayal of all of those who were killed by the IRA during the Troubles. How dare Prince Charles meet with someone who we believed was involved in the killings? It is a tender and sensitive issue.

We need to remember as Prince Charles meets Gerry Adams that Charles’ very favourite Uncle, Lord Mountbatten, was murdered by the IRA on August 27th 1979 while on a fishing trip off the west coast of Ireland. The IRA killed 18 British soldiers the very same day in Warrenpoint. So for Prince Charles this is personal. He is having to deal with the pain he felt and no doubt will feel again today.

Having been at this year’s Sinn Fein Ard Fheis I am aware too that there will be those in Republicanism who will not support this meeting. After Fr Martin Magill and I spoke about reconciliation, followed by a very similar speech from Sinn Fein Chair Declan Kearney, there were some vociferous speeches on the floor making sure no British Royal was invited to the Centenary Celebrations of the Easter Rising next year.

So both Prince Charles and Gerry Adams are taking a bold step today. Why? I believe that both know that if we are going to wage peace in this country then these messy moments need to happen. It will not be comfortable for either. Yet, they courageously create a strong symbol of the future somehow overcoming the past.

For me that is what Jesus Gospel was all about. The past being redeemed in the present to transform the future through grace and forgiveness.

I wrote this poem about Queen Elizabeth II’s two visits to Ireland; shaking hands with Martin McGuinness in Belfast and then bowing at the War Memorial in Dublin with President Mary McAleese. They are influenced no doubt by Padraig O Tuama’s poem Shaking Hands and Luka Bloom’s song A Seed Is Sown.

And did memory stab

That boat on the ocean

As her courage broke

Through her heart’s emotion

Blow up the past

Did he see the loss

In her smiling face

And feel the forgiveness

Majesty of her grace

She spoke their language

She bowed her head

Bent down on her knee

To honour their dead

She marched right through

To lead a brand new parade.

I wrote this next poem recently about my own struggles in the messy relationships of peace making having spoken at this year's Sinn Fein Ard Fheis.

Between the bloody dark

Between the hate riled gloom

And the rays of forgiveness, bright

Friendships can be messy.

Between the blowing up

And the pieces fixed on landing

Between the bleak black funerals

And the bridegroom standing

Friendships can be messy.

This is an awkward dance

With all our wounds still hurting

Take two up and one back

Move close to hold the seams

Swirl in the suspicious space

To soar in audacious dreams.

We need to be led on a different road. Today’s meeting will be disconcerting for all of us and even more painful for many. As an icon of Unionism meets an icon of Republicanism let us follow their lead. If the future on this island is to be different than the past then we need to tenderly embrace it.

These poems feature in Steve Stockman's new book Awkward Dancers & Audacious Dreamers that will be launched in Fitzroy on May 31st at 7pm. All welcome!