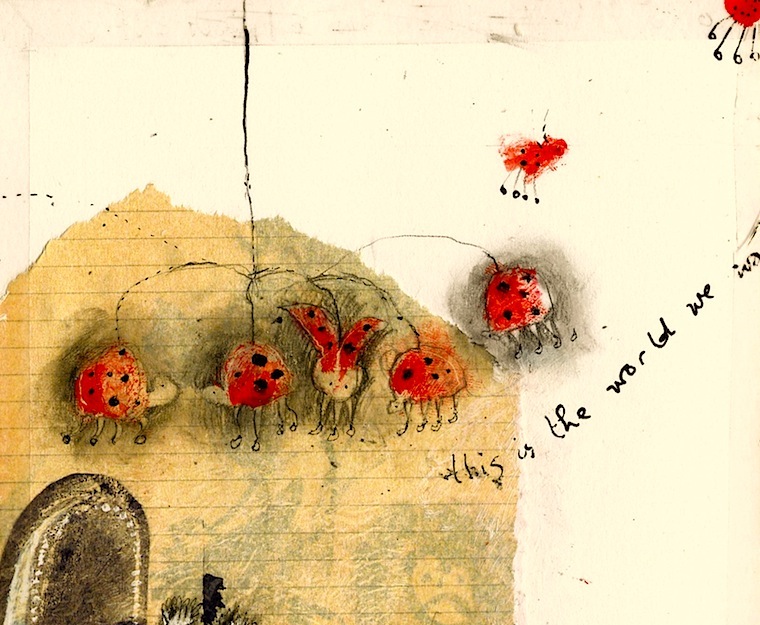 Steve Stockman will self publish not one but two new poetry books, Awkward Dancers & Audacious Dreamers and Reflections, Poems and Benedictions, on May 31st in Fitzroy Presbyterian Church, University Street, Belfast at 7pm. It is a free gig but come with money to buy books!

“Poetry is a strong word for what I do,” Stockman says. “I play with words, phrases and mostly rhymes. I call it pop poetry with a preacher’s punch. And… maybe I should add… that I hope in most instances it is a gentle punch. Now that is poetic licence! Is that a little awkward and audacious of me,” he laughs!

Stockman is better known as the writer of Walk On; The Spiritual Journey of U2 published as was another book The Rock Cries Out; Discovering God In Unlikely Places by Relevant Publishing. His seven previous books have all been self published.

“My books have mostly been sold in aid of charitable projects; for trips to China and South Africa. These two are for a school in Uganda, a Youth Trip going there and for Fitzroy’s Building project in South Belfast. So, self publishing makes money and people might buy the books as much for the good cause as the poetry!

It is 2008 since his last book, Sad… And Beautiful Place.

“The last one was more about Gordon Ashbridge’s amazing photography than my poetry and it was all about Cape Town townships. So, it has been nine years since I brought out a book of poems.”

As a result it seems there were so many poems he had to bring out two books at once, like Bruce Springsteen with Human Touch and Lucky Town!

Awkward Dancers & Audacious Dreamers is much more lyrical and Reflections, Poems and Benedictions is less rhyming and more liturgical.

“They are slightly different books. If they hadn’t been I would just have edited it them into one.” Stockman explains.

Awkward Dancers & Audacious Dreamers are those rhyming, more like song lyrics, poems that the other books have been. I think my work is too literary to be songs and not literary enough to be poetry. My album with Sam Hill under the name Stevenson and Samuel called Grace Notes showed the place where my words sit best. I guess if Sam lived in Belfast there would have been more of that.

At the launch Chris Wilson will sing a song he wrote after I sent him a poem BUT it is more the idea that he captures than the words. Bryan Gormley will be doing the same, actually with one from Reflections, Poems and Benedictions.

Reflections, Poems and Benedictions? Well that is all in the title. That collection is stuff I used for worship services. I often write carefully constructed prayers and benedictions. I also write for weddings and then there are two mini sections of pieces I have written for Christmas and Easter. I hope they will be helpful in personal reading but maybe that people will use them in services.

So what are Awkward Dancers? And who are the Audacious Dreamers?

“There is a theme running through both books I think. These have all been written out of my ministry. The awkward dancers are those awful moments that happen in people’s lives. Bruce Cockburn describes it as “ a wind comes out of nowhere and knocks us off our feet.” Almost six years ago I became the pastor of Fitzroy and have sat with my people in some very sad situations. One of the ways I deal with that is to turn it over in my mind and heart and soul in rhyme. So there is a lot of death in Awkward Dancers... They are mysteries of darkness that are not easy to nail down so I came up with that awkward dancer idea.

As a Christian I believe that we can change the world. That is an audacious idea. The Bible speaks about God’s people seeing vision and dreaming dreams. I hope there is a lot of that in these poems too. Hence the title.”

Since moving to Fitzroy six years ago Stockman has also become involved in reconciliation work, helping found the 4 Corners Festival and even speaking at this year’s Sinn Fein Ard Fheis. That has sneaked in to the work too.

“My pontifications on my wee country has always been in there but the poems in these books are probably more hands dirty. I was a passive peacemaker for a long time. I am definitely more active now. With my partner in peacemaking Fr Martin Magill we have found ourselves in some disconcerting places. All of that is in there and even a poem about two Belfast City Mayors, Máirtín O Muilleoir, and Nichola Mallon. For those who have wanted the Prayers For the 4 Corners Of Belfast, that we named the festival after, is in Reflections, Poems and Benedictions.”

The launch is sure to be a creative evening too. Some songs, a few poems and a reflective ending.

“Chris Wilson, Dave Thompson and Bryan Gormley will be doing a song or two around the lyrics. There might be a little bit of video and of course the poems with introductions. It’ll be a good evening but my mantra has always been that art has not to be just good but good for something. I hope that the books do something good too. I hope the poems will be contributors to healthy souls and a healthy society and also that the money they raise will bring good onto the streets of Belfast and Arua in north west Uganda!”

The books will be on sale in Fitzroy on May 31st, from the Fitzroy office after that and hopefully as an Ebook in early June.

Hi Steve,
Great stuff. Congrats! Six years wow it seems like yesterday.
Please reply and post an avenue for buying your books from afar. We would have come and bought books but we are just too far away. We will post to our Facebook page and hope for 'going viral'.
All the best.
In His grace,
Marda and Ward