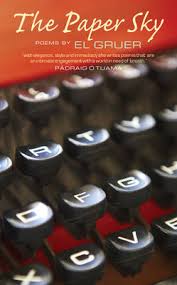 A couple of years ago a young women approached me after Church and introduced herself. She said that she was studying a Masters in Poetry at Queens University and would be around for a wee while. I am always delighted to have 20 somethings around Church so I was thrilled but I dismissed the poetry thing as we had a guy doing a PhD in poetry!

In the afternoon I became a Facebook friend of the young woman and noticed a mutual friend. I messaged him and asked about my new Church attender. He waxed lyrical about her and sent me off to her website. Ten minutes later and I was taking her poetry a little more seriously.

The women was El Gruer. The first poem I watched her read on that website was Hoods. I was immediately mesmerised by her word play, her performance and the deep insight into the human condition and the wisdom as to how she was sharing it.

It was not long before I was using El’s genius. I hope I didn’t abuse it. She read in Church, flexible for different occasions. I shoved her into the middle of a songwriter in the round gig at the 4 Corners Festival and without guitar or melody she more than held her own. Every time she performed Hoods I was utterly gripped and took a lot of pleasure in watching the audience fall under her spell.

Hoods features in El Gruer’s first published book of poetry The Paper Sky. It is an accomplished work and has a range of styles. This girl can do Slam, literary, pub gig, Church or University.

Thirty years ago I discovered Steve Turner and Stewart Henderson. They were poets who I could penetrate and that wasn’t the case with most poetry. I was a Dylan boy. Gruer reminds me of Turner and Henderson but, if they might forgive me, with a little more poetic ability. El did that Masters in order to stretch her skills and that comes through in The Paper Sky. Still penetrable though!

For me the over riding theme and power of The Paper Sky is Gruer’s ability to humanise. In some cases that is to re-humanise. In other places it is to awaken us to the humanity we are missing in our every day living.

Examples of the former would be Artism where someone with autism becomes a glorious piece of art and Svay Park, Cambodia 2013 where she meets a young sex slave women that same age as El herself.

Examples of the latter are Notes Found In A Trench and the human cost of war and I’m Sorry, Japan where she reviews her own day on the same day an earthquake hit Japan.

Poetry and art in general have an ability to transform spiritually and socially. El Gruer’s poems awaken our spiritual awareness to people and things and if you listen in closely as you read it is all underneath God’s sky with a connection to what is above it. I look forward to marinating my days in these well ordered words, vivid images and people who will become much more alive in my soul as a result.