Home Archives Profile Subscribe
STOCKI SURMISES PRINCE CHARLES MEETING GERRY ADAMS... DISCONCERTING BUT NEEDED
HOW A ROUTE DIFFERS FROM A ROAD... IN THE FOLLOWING OF JESUS 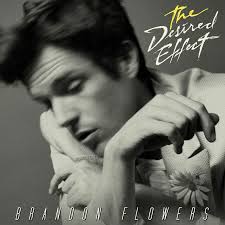 Brandon Flowers is fast becoming a hidden pleasure. You know the artists you can’t get excited about because you would lose your rock fan cred. He’s the singer in The Killers and they have gotten way too popular. Cred means not liking “the commercial”. He’s a rather handsome young man. Cred means that when he is a poster on some girl’s wall it can’t be for his magazine cover looks. Now he’s released the album that proves the point; 10 tracks of pure pop that could all be hit singles; lots of commercial success and young girl (and older) swooning!

Well, I like Brandon Flowers! For me he is halfway between rock and pop. The Desired Effect is pop through and through. It is even the kind of pop I don’t like. Heavy on synth, full of drum machines and unabashedly influenced by the 80s pop that I hated back then. Pet Shop Boys, one of my ultimate my pet hates, and Bronski Beat even show up.

Yet, it never gets too pop. It always stops just short. Not even the suburbs. He’s stopped off on the first village outside. Close but still rocking enough. The advantage of having the Pop City Limits sign in his view is that these melodies dig well deep and do so with immediate effect. I have a weakness for catchy tunes.

On top of all of that Brandon Flowers has content. He massages the theo-musicologist in me. It is well known that he is a Mormon and very committed to it. However, it seems to me that all his references are from the New Testament and not the Book Of Mormon.

There’s mercy and faith and sons of prediction. There’s the need and possibility of change (I Can Change) and wisdom in the letting go (Between You and Me).

I don't carry any bones

If you see things a little different

I'm not casting any stones

Been taking it for granted

I've got the right to speak my mind

Just like the dead, the lame, the Leper and the blind

“The eyes of God are watching over us

So we don't break the golden rules

The seven seas, have we learned

Or are we sailing on a ship of fools?”

“Ain't that the way that it's always been?

Standing at the water's edge waiting for the fog to clear

Tackle or touch, you sink or you swim

- The Way Its Always Been

If Brandon Flowers finds his musical sounds in 80s pop, he gets his spiritual inspiration from U2 and he sets that faith in the characters in the story of Bruce Springsteen’s The River. These are all songs of ordinary people struggling to keep food on the table and love in their marriage. It is about a world that could make us weary if we don’t find the glimmers of something redemptive to give us purpose, meaning and life in all its fulness.

“Punch the clock, baby on the nightstand

You close your eyes, waiting for the Sandman

Spend your life, bracing for the crash land

You forget, baby it's a dreamland

Baby it's a dreamland”

The Desired Effect has the sweet veneer to hook us in and then the lyrical intrigue to keep us in there, listen after listen. I like Brandon Flowers!