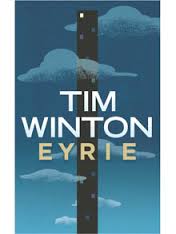 Tom Keely, the central character in Tim Winton’s novel Eyrie, has been lingering in my mind now for weeks after I finished the book. That suggests something substantial to me.

Keely is a layered character. He has been a successful and reasonably well known environmental activist who has taken a fall in public. As the book starts he is heading to rock bottom, depressed and hitting bottle and pills. He is holed up in a drab tower block in Freemantle, Western Australia.

The cool guy who lost all his cool has a back story of being the son of a couple who, having had a Christian conversion experience, became selfless rescuers of neighbours needing love and refuge. His father has died but his mother, no longer as passionately active though no sign of having lost her faith, is very much part of the novel.

Enter Keely’s current neighbours who need rescue and refuge! Bumping into a women (Gemma) in the tower block lift he finds out that this Grandmother is actually one of the people his parents rescued during both of their childhoods.

As he becomes involved in the rescue of Gemma and her grandson Kai, Keely’s own redemption is given a kick start, though never ever looks hopeful of success! A father-shaped-hole is uncovered and there is a God -shaped-hole haunting beyond that. The salvation of the characters and situations is ever messy and the plot throws up constant dynamics of dilemma in doing the right thing. Danger is always lurking menacingly and the next page is never predicted.