Home Archives Profile Subscribe
A SLAVE FINDS HIS PURPOSE ON SLEMISH - BBC Thought For The Day on ST PATRICK'S DAY
THE STORY OF RADIOHEAD AT THE MANDELA HALL, JUNE 19, 1997 & MY PART IN IT

PRAYING WITH AN ARCHBISHOP AND A MAYOR - ST. PATRICK'S DAY PEACE PARTY - a few thoughts 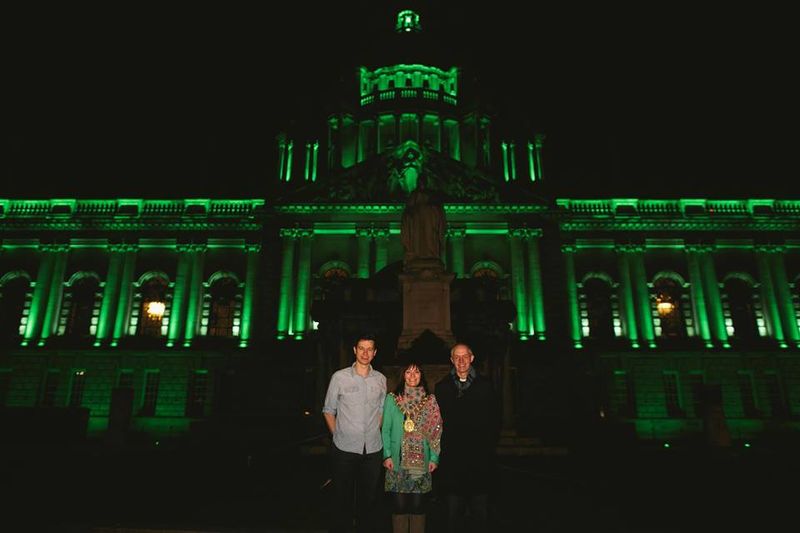 It was a good way to end St. Patrick’s Day. A couple of hundred young people, their youth leaders, Church leaders and political leaders praying with the Lord Mayor Of Belfast and the Archbishop of Canterbury outside of a Belfast City Hall lit up in green. As we looked out on our wonderful and wounded city, in my imagination I walked through the four corners and prayed for peace and reconciliation… Short Strand… Tigers Bay… Newtownards Road… Shankhill Road… Falls Road… Donegal Pass… Ardoyne… Lenadoon… The Holy Lands… the city centre.

It was the end of a St. Patrick’s Day Peace Party at the Waterfront Hall. Around the songs of super voice Chris Wilson and worship from Blue Tree we heard from the very hearts of the aforementioned Lord Mayor and Archbishop as well as event imaginer Jasper Rutherford. When I say we heard their hearts, that was the mark of the night. Both Mayor and Archbishop came out from behind their titles and vocational roles to reveal with real passion the even bigger callings on their lives.

Nichola Mallon has been an outstanding Lord Mayor. We have had some exceptional Mayors in recent years and Nichola followed Máirtín Ó Muilleoir who through a manic schedule all recorded on Twitter seemed impossible to follow. Well in her humble way Nichola said, “Watch me!” and has shone in her role.

Tonight she shared her faith story, her friendship with Jesus, how it has influenced her year in office giving affirmation to the city’s unsung heroes. When asked why she ended up in City Council her answer was simple, “You can’t do nothing.” The angry young teenager shouting at injustice got an embrace of soul from God and has found the confidence and courage to be Belfast’s first citizen leading us in prayer at City Hall with the Archbishop of Canterbury. What a story!

That Archbishop took off his robes and titles too. He stepped away from the podium, and the well researched notes of his communications team, and shared his passion for prayer and proclamation with the aim of restoring everyone’s true identity. In a country where our identities are crumpled up and trampled upon by sectarian divisions and hatred how can we be involved in the work of reconciliation, restoration and redemption that would help heal our damaged identities?

This was a significant visit. It is the first time in fifty years that an Archbishop of Canterbury has been to Patrick’s burial site on St. Patrick’s Day and that his message was reconciliation shows how key it is to his priorities. The visit and the evening Peace Party come at a significant time. There is a new desire among many Church leaders to be about the peacemaking mission of Jesus. There is also a realisation, as articulated by Jasper Rutherford, that missional transformation in Ireland is likely to be unleashed as we courageously follow a peace agenda.

Peacemaking is hard work. It can be slow. It needs patience. There can be set backs, at times so regularly that it dents your enthusiasm. There can be opposition, often from where you think you should be getting support. Affirmation is important and what the Archbishop did last night and throughout his visit was to encourage us. His mention of Fr Martin Magill and my recent visit to the Sinn Fein Ard Fheis was personally humbling and a deep soul caress of grace.

Many of our prayers, as we stood and held hands with Church leaders across the traditional denominational divide and political leaders across the political divide, was that nights like this would give new impetus to our work of the Kingdom. We were all desiring that the youth amongst us might catch a vision to build a future society with new shared space. As my daughters heard an SDLP Mayor pray and held hands with a PUP politician as we all prayed I realised that this was a sacred place where something alternative was being birthed and living. I came away inspired to keep on keeping on; to be pioneers of peace. Let us keep exploring and finding our fully formed identities as followers of Jesus and as a society.

Yep. Nicely surmised. Twas a night in the garden (the Titanic Garden)
you and I and nature
And the Father and the
Son and the Holy Ghost
In the garden