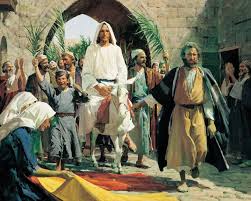 If we cock our ears and listen carefully to the story of Easter week we will hear something utterly counter intuitive, upside down, inside out, socially subversive, spiritually perverse and utterly crazy…

On Palm Sunday Jesus rode into Jerusalem on a donkey. The crowds were on adrenaline rush. They thought the King was coming. A victorious King. They were singing, they were waving palm branches. This was the one who was coming to overthrow, to set up power, to rule over those Romans. The chosen people were fighting back. We were days away from the big WIN. Stand up for the Galilean man!

The donkey was a clue. And the lack of arms. Jesus was actually riding into Jerusalem to get beaten… literally. He was heading towards defeat head on. This was not going to end well. Jesus was a loser… losing… for losers. When his big rough tough body guard Peter went to fight Jesus told him to put away his sword, his Kingdom was not of this world.

Who, being in very nature God,

did not consider equality with God something to be used to his own advantage;

rather, he made himself nothing

by taking the very nature of a servant,

being made in human likeness.

And being found in appearance as a man,

by becoming obedient to death—

even death on a cross!

Jesus was about a very different kind of Kingdom. It was going to be strong in humility, powerful in grace, dangerous in love. It was not going to be anything like this world.

It was what he had been about all along. Blessed are the meek. If someone strikes you on one cheek then turn the other cheek too. Do good to those who persecute you. The first will be last and the last will be first. All his teaching was made flesh as Jesus walked through Easter week.

If we cock the ears of our soul and listen really closely this week we will hear Jesus whisper, “follow me”… yet if we are honest we are still trying to fight, to win, to take power as the world does. It is in the humility of Jesus that the world is changed and transformed. It is in giving up our lives that we find the redemptive power of resurrection life.