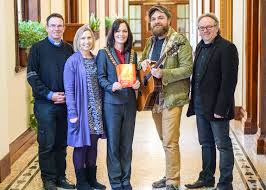 Last year I wrote a poem, reflecting on my interactions with Belfast Lord Mayor, Máirtín Ó Muilleoir. When Nichola Mallon took over last June I thought she had a tough job in following Ó Muilleoir's omnipresent exuberance. She more than followed. I have found Nichola a courageous, honest and warm Lord Mayor. She shared her faith with gentleness and deep conviction. She sought out the unsung heroes of Belfast and gave them their moment to sing. The highlight for me, among a few, was her standing with the Archbishop of Canterbury and praying for Belfast, as we stood holding hands across denominations and political lines, with City Hall lit up green for St. Patrick's Day. So, here's my poem for Nichola. Thank you Lord Mayor. Great job!

From behind a meteorite

That had hurtled bright

With a warm souled glow

Confidence on the grow

All your anger aimed

To a brand new shore

We’ve never been before

With dignity, without pity

When the heroes can’t sing to you

You do what Jesus would do.

An Archbishop and a Lord Mayor

The City Hall all swathed in prayer