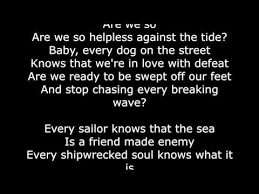 “…every dog on the street

Knows that we're in love with defeat

Are we ready to be swept off our feet

And stop chasing every breaking wave?”

It was a Donald Miller article, that I found on Facebook, that spoke of the need for us to take our own initiative in our spiritual lives. That is the second of my steps to a spiritually fulfilling 2015.

It is this taking of initiative that I think Bono is on about in Every Breaking Wave. The song was originally slated for the as yet unreleased record Songs Of Ascent, the title of which comes from a section of the Psalms, and that, to me, sounds like an album of spiritual ruminations. I perceive Every Breaking Wave therefore as a spiritual song.

My take on the song is that we can simply go with the waves. There is an undertow moulding, shaping and honing us. We can enjoy the waves. Seek them. The thrill of life. Materialism. Success. Yet, the song suggests that it never quite reaches what we ultimately need. Shipwreck and drowning are words in other parts of the songs.

Bono’s break from the breaking waves is to allow ourselves to be swept off your feet. As a result of Bono’s beautiful obsession with the Christian theology of grace I am thinking that the “swept off our feet” line is about the love of God. That is the intimacy that the shipwrecked souls in the song have craved; relationship with the divine restored.

Philippians 3 might have been what Bono was thinking about when he wrote I Still Haven’t Found What I’m Looking For and I am pretty convinced that Philippians 2 might have inspired Fall At Your Feet but I doubt if Bono was paying any thought to chapter 3 when he wrote Every Breaking Wave. However, I want to jump into that passage and see some similarities in the life of the apostle Paul.

Paul is riding every breaking wave in his attempt to find God. He would literally experience being a shipwrecked soul but here it is metaphorical. He is desiring intimacy with God and surfing every legalistic wave to achieve acceptance. Then Paul is swept off his feet by a righteousness that comes, not from his own wave breaking religious efforts but by God’s initiative:

When he realises that this is an alternative then Paul takes initiative and shifts his aim. He seeks something more, something higher, something that comes with resurrection power but also suffering:

10 I want to know Christ—yes, to know the power of his resurrection and participation in his sufferings, becoming like him in his death, 11 and so, somehow, attaining to the resurrection from the dead.

What are the years for? Most of you very gracious people who read my blog have all the ability to surf waves and fill your years with kicks, purchases, holidays and multiple sacrifices at the altar of leisure. Is that what we want to fill them with? As another year begins we have the opportunity to shift our aim. To choose more. To be swept away and get to know resurrection.

this is awesome good work provided