LET ME BE A PARTICLE OF YOUR LIGHT... (Bruce Cockburn - Hills Of Morning) 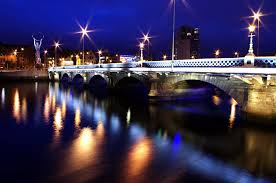 There are phrase that the preacher uses that stick, that are repeated, that can become imbedded in lives and communities. Just a few words that can carry a sermon or a theological idea or a mission statement into people’s minds before hopefully seeping into their hearts and souls and then out into their lives and actions. “Particles of light across the city” has become one of many such phrases in Fitzroy.

I stole it as I often do from a song. My very favourite Bruce Cockburn record is Dancing In The Dragon’s Jaw. It is a spiritually potent album, vivid in literary images, influenced by the Charles Williams books that Cockburn was reading at the time. For years I had the chorus of one of that album’s songs, Hills Of Morning, on a photograph of the Giants Causeway up on my study wall.

These words conjure the mystery of how us humans somehow get the privilege of merging with God in God’s tangible presence in the world. It is a prayer to be involved in God’s breath, in God’s light, in God’s mission to make the world better than the world is.

Back in September 2010 I titled a sermon “Particles Of Light…” and it has stuck. As well as attempting to be missional where we are located, on University Street in Belfast, we are aware that as a community we are vocationally scattered across the entire city and indeed beyond. Our members work in very influential places, effecting social change and caring for many people who are not finding themselves cared for elsewhere.

A friend of mine who now works for a Christian development organisation told me once that when he was a probation officer no one asked him how he was bringing the Kingdom but that now that he is working for a “Christian” organisation lots of people ask him.

I don’t believe you have to be working for a Christian organisation to bring the Kingdom. We can, and indeed must, be “particles of light” scattered across the city, bringing the thinking, voice, touch, attitude and ultimately love of God wherever we are and whoever we are with. Those particles of light are somehow partners with God making up the bigger light. I guess that is why Jesus called himself the Light of the world and then at another time told the disciples that they were the Light of the world.

Cockburn’s lyric is powerful prayer seeking God that we might be part of the force that transforms the world.