IMAGINING FORGIVENESS OF YOUR CHILD'S MURDERER 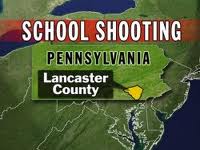 It was one of those, sadly too many, news events that I will never forget. Another shooting in America, this time in a small school house in the Amish community of Lancaster County, Pennsylvania. Five children dead and five injured. The bloody horror of that day in the Nickel Mines school house will live with me for many years but the response of this Amish Christians struck me with a force in my inner soul that I will remember more and please God longer than the tragedy. This quaint and spirituality eccentric people preached in their actions a dignity and Godly strength that transcends the times we live in.

Within hours of the shooting dead of five of their precious children, Amish leaders had visited the wife of the murderer, Charles Carl Roberts IV, to extend forgiveness. They even attended the murderer’s funeral. This is not the normal way of things. It is a grace that is not of this world. I remember one of the Amish being thrust into the media spotlight in ways that they resist. His words, spoken with deep conviction and humble simplicity, will never leave me, “Jesus is about forgiveness and so we have to learn to forgive.” It seems so obvious. It must be incredibly difficult. They believe God will give them the strength.

This all takes place in a tiny community in the middle of a nation that has responded very differently to its’ children being murdered. The Amish took an opposite response to the American government after 9/11. Surely it would have been easier for the Amish victims to rage against those outsiders who entered their antiquated safe tranquility to murder their loved ones and to launch a war against a mass murderer. Easier was never the way of the Gospel of Jesus. And the last words on Jesus lips were “Father, forgive them for they know not what they do.” This Amish community did not only believe those words, the followed them and the one who said them.

It is almost impossible to imagine the pain that that Amish community experienced that day in 2006. It is even more difficult to imagine where they found the generosity of spirit to forgive. Today the murderer’s mother cares for the worst injured child in the shooting that her son carried out. She was ready to to leave the area after the killings but was encouraged by the Amish, including the parents of the two of the children her son killed, to stay. Imagine that! Imagine a world like that! Imagine a Northern Ireland where that simple but radical generosity of human spirit resourced our responses to one another. How long would peace take? How different would our lives be?

4 Corners Festival will be showing the film A STEP TOO FAR? A CONTEMPLATION ON FORGIVENESS that is filmed in Lancaster County’s Amish community and in Northern Ireland - Saturday February 7th at 3pm in Strand Arts Centre. It will be followed by discussion with the director of the film and others including Paul Gallagher shot by loyalist paramilitaries in his own home as a teenager, now confined to a wheelchair, not that Paul and the word confined go together; and Jonathan Abernethy-Barkley whose dad was shot by the IRA when he was just two years of age. How will they respond to the movie? What do they think of forgiveness? A powerful afternoon...