AN ANGEL WITH THE VOICE OF ELVIS... IN THE GHETTO 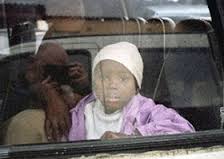 I loved my Mission Trips to Cape Town in the zeros or the naughties or whatever we called that first decade of the century. Yet, every time I went we were very aware of security. South Africa has a high crime rate and on every trip I read the first few newspapers and then asked myself why I was bringing my family to somewhere as scary as this. Many of my friends who live there have never experienced any crime but many have and some live behind gated communities that we know nothing about in Northern Ireland, where we have had our own violent recent history.

In truth most times that we took teams to Cape Town we had incidents of petty theft. I remember the first time very clearly. We had a new team in and it happened so early on that they were a little spooked. Their feeling of insecurity had us seeking refuge in the Holiday Inn at midnight. It was all very dramatic but the kind you don't need when you have 25 students in your care in another country.

I have to say I was angry and looking for vengeance. We had come here to bring help to the people and some of the same people had broken into our hostel and stolen some of our stuff. As we were trying to deal with the consequences of that robbery, one of our local colleagues was robbed too and therefore could not be of any help to us.

In the midst of all this another friend of mine was in Cape Town at the same time, playing in Ronan Keating’s band! There are not a lot of bands who tour South Africa and so it was agreed that we would take the entire team to the gig. I am no fan of Boyzone or Ronan Keating but my mate was playing guitar (thankfully he has moved on to Bryan Ferry now!). Keating was as I expected a good entertaining pop act but my interest wore thin after a while. When he did Van Morrison’s Brown Eyed Girl as a Belfast boy in Africa I had to sing along!

Then there was a moment of surprise. I did not expect to be struck deep in my soul by Ronan Keating.... BUT I was. Keating did a version of Elvis Presley’s In The Ghetto. Presley wasn’t known for his prophetic songs or singing anything to do with social justice but this one is a gem. The story of a baby born in poverty whose mother worries that that poverty might lead him to crime and that in turn might endanger his life poignantly fulfilled.  I heard something whispering to me, even in the voice of Ronan Keating, which changed my feelings for the street kids whose own environment of poverty caused our inconvenience.

In The Ghetto was written by Mac Davis and was originally called The Viscious Circle. The songs generational poverty led my thought to words of Steve Biko. Biko talked about not so much considering the crime of a stolen bike as the poverty that caused the bike to be stolen. Jesus spoke about turning the other cheek, forgiveness and love of enemies. Keating choosing that song, that particular night opened a door in my soul. Who'd have thought!?

From underneath the beauty of the mountain
The underbelly of the ugly struck
Curse can pull a knife and stab you
No matter what your treasure trove of luck
The innocence of my trust was violated
And my soul left battered and broken
I came to this city all wide eyed
Now they’re bloodshot and ripped wide open
In the heat of my cold blooded anger
I want to catch them and never let go
Then an angel with the voice of Elvis
Sang a song called In The Ghetto.