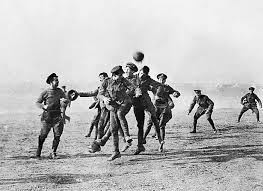 You’ve seen it in the Christmas Sainsbury’s TV campaign and you will hear it trying to take on the X Factor winner to make the Christmas Number 1 single. On Tuesday night  (December 9th) you can go and watch the 2005 Oscar Nominated French movie Joyeux Noel at the Strand Arts Centre. It is a remarkable moment in history and worth the advertisement, the song and the movie. Yet, it is worth more so much more than some artistic representation.

This is an astounding thing. The First World War is only six months old when soldiers on both sides downed guns that they were pointing at each other and for Christmas Day sang carols, shared food and played soccer in No Man;s Land. It is not a romantic Christmas Hollywood story. It happened. At the beginning of the most barbaric of wars the goodness in the depth of human beings overcame the hatred of conflict and enemies had a day as friends.

The Farm wrote their anthem All Together Now around these events in 1991 and it reached number 4 in the UK charts. This year to mark that Centenary of the event they have gathered an all star cast and hope to be number 1 on Christmas Day exactly 100 years on from the event! The lyrics say it:

“A spirit stronger than war was working that night

Countries' borders were right out of sight

They joined together and decided not to fight

In no man's land, together."

Peter Hooten The Farm’s lead singer has said, "It was a spontaneous act of humanity that transcended the horrors and barbarity of World War One and is a story which still resonates 100 years on. It is a story of hope and peace which should be told over and over again.”

Next Tuesday’s showing of Joyeux Noel gives Belfast the opportunity to reflect and ponder. In Northern Ireland we are in the midst of many contentious Centenaries. Here, in the middle of such commemorations, is one that celebrates peace making and reconciliation. Yes, these guys who enjoyed each other’s company for a day went back to killing each other but for one short time they showed us another way, a humanity that lies deep within the heart of us.

It is a hopeful message and perfect story for Christmas Day when we remember the angels declaring Christ’s birth with the words “Peace On Earth”. On this day 100 years ago ordinary young men caught up in an awful war were brave and imaginative enough to interrupt war with peace. It’s what Christ was being born to bring. May the remembering of the Christmas Truce exactly 100 years ago inspire all of us to be courageous and imaginative.

Buy the single. Go to the movie (All proceeds to 4 Corners Festival)... for movie details click here

Posted at 10:31 AM in 4 CORNERS FESTIVAL, PEACE AND RECONCILIATION | Permalink | Comments (0)