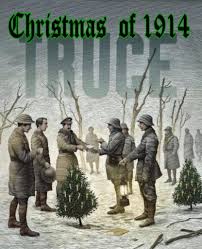 100 years ago today, in 1914… Soldiers all shivering. Maybe your Granda or great Granda… Shivering with cold. Trembling with fear. They had left their homes and families. Called by their country to fight. Here they were on Christmas Eve in the trenches of France. 100 yards away were the enemy, Germans pointing guns, landing shells, trying to kill and maim.

So here they were. At war. Their young lives on the line. Many would be killed. Only some would see their family again. And even then changed forever.

1914 years earlier… Shepherds were out in the cold night. They were wrapping up warm. They were looking after the flocks. They were alert to every danger, to every beast that would prowl and pounce and kill the sheep. They wouldn’t sleep. They would keep watch. Hoping for a quiet night.

100 years ago today, in 1914… Suddenly out of the tension and silence… a noise. A beautiful noise… coming across the killing fields of No Man’s Land… the Christmas Carol Silent Night… being sung in German… a Christmas song… cutting deep into the tender hearts of the soldiers… on both sides of the war.

As the sound wafted in the Christmas Eve breeze… a few Scottish soldiers joined in… a bagpipe played Silent night… the soldiers started to sing… Both sides harmonising… different languages… different sides… united in Christmas.

1914 years earlier… Suddenly the night was alight… the shepherds covered their faces… they were frightened… sore afraid… What was happening… where were the sheep… were they in danger… “DO NOT BE AFRAID”… it was an angel… “I come to bring you good news of great joy…. Today in the city of David, a Saviour has been born who is Christ the Lord”… Wow!

100 years ago today in 1914… the singing went on… and then slowly but very surely… a few soldiers peered out over their trenches… climbed out and sat on top… still singing. After some singing a few intrepid soldiers approached each other… reached out their hands and shook hands… someone threw down a can and they started kicking it back and forward… a few sat down and showed each other pictures of their loved ones back home… through language differences they smiled… found a drink to share… a piece of chocolate…

And for a moment the world was at peace…

The world could once again be at peace… This baby means that we could all step out of our trenches… and never go back in!