Home Archives Profile Subscribe
BRINGING BELFAST TOGETHER - 4 CORNERS FESTIVAL 2015 is in the WORKS
WHEN BRUCE COCKBURN SANG JUST TO ME... 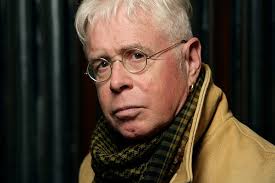 “And now... a Toronto blessing that it’s worth staying on your feet for... for over twenty years this man has prophesied into my world, provoked my mind, preached to my heart and pastored my soul... ladies and gentlemen the clearest rumour of glory in the world today... give a Greenbelt welcome to...
Bruce Cockburn”

It was August 1994 I got the privilege of saying those words as Bruce Cockburn walked on stage behind me and gave me a little bow. They have been quoted back to me at Greenbelts ever since; I wish my sermons were as well remembered. A couple of years later my mate Doug Gay would say at my wedding that he had now been to the best three moments in my life; the other two being when I gave communion to 20,000 at Greenbelt in ’93 and when I introduced Bruce Cockburn at Greenbelt '94. He wasn’t wrong.

At Greenbelt ’89 I had gone to two seminars back to back. One was Australian preacher John Smith who told us to look for heroes beyond pop posters and find people who changed the world. Twenty minutes later I sat on the same grass and heard Cockburn being interviewed and heard a man who was more than a great guitarist or lyricist or singer. Here was a man connected to Christ and then connecting Christ in his passion to change the world in his art and his life.

In 2006 I found myself in Cape Town gazing from my apartment across to The Lions Head, companion to the magnificent Table Mountain. When it comes to sunsets though The Lions Head beats it’s more prestigious buddy with swathes, swirls and washes of colour drifting around it at the end of daylight. It’s a mystical vision of God at his easel throwing us humans another sweet surprise of beauty. Anyway, as I sat there I sought a soundtrack, a help in my untangling of the mystery and wonder; something to make sense of it but to aid the mortal mind to describe it. What music? Who?

Which is how I found myself rediscovering the masterpiece that is Dancing By The Dragon’s Jaw by Bruce Cockburn. This was my introduction to the Canadian Christian mystic way back in 1981 Magdala Street where Queens University Medics had a house that had their alarm clock wired up to a magnificent stereo system and Alan McIlroy was going about his efforts to convert me to guitar genius of Mr Cockburn. Eventually I was won over by the lyrical splendor of his poetry. Here I was nearly 25 years later rediscovering it. Every song seemed to be gazing at the same scene as me. The finger dancing melodies running across the fret board of my soul evoking the awe. The poetry perfectly giving my brain words to latch onto in some hopefulness of explanation. And it was every song. How I’d forgotten songs that had once been every day meditations; Creation Dream, Hills Of Morning, After The Rain, No Footprints and the best known Wondering Where The Lions Are. It was the best kind of spiritual moment.

It was literally a coincidence that my wife had just brought me the promo of Cockburn’s new album when she joined me in Cape Town; a beautiful surprise, indeed. And more beautiful the surprise was that there were echoes of Dancing in the Dragons Jaw in the acoustic sound. Cockburn can make an acoustic guitar jig and reel, infuse it with life and the spirit of something beyond. His last album You've Never Seen Everything suffered from being a little over burdened in its production. Life Short, Call Now is not sparse making good use of brass and strings but it allows Cockburn to do what he does best, giving room for the depth of his lyrics to breathe around the bounce of his fluid jazz influenced playing.

Of course after the mystical landscape, horizons and skies of the seventies Cockburn started to look at what lived in the shadow of the mountains in the eighties. From the Creation Dream of God he turned to the Destruction Nightmares of Humans. On Life’s Short, Call Now both these themes live, side by side. When it comes to human nightmares Cockburn has looked down the barrel of American guns for decades and a war in Iraq was hardly likely to go without comment. His work has been informed by many fact finding missions to Central America, Mozambique and Nepal among other places. So, his recent trip was to Baghdad and so George Dubya is asked to stop “projecting his shit at the world” in Tell The Universe. This Is Baghdad that follows is one of those descriptive pieces of place and event that only Cockburn can pull of with such detail and feeling. I was thinking a little bit more of this skill as I tried in vain to capture in detail the impoverishment of townships.

Throughout these songs of political warfare, economic injustice and materialist obsession, there are echoes of transcendence and the questions are always addressed to the soul. Love and mystery bring light through the cracks and hopefulness of another world tomorrow keeps the guitar dancing and the poetry full of mysterious something-other. The last words on the album on the song To Fit In My Heart, before the third instrumental track, are a case in point, “Space time strings bend/World without end/God’s too big to fit in a book/Nothing’s too big to fit in my heart.”

Or on the slow burn blues of Mystery he is seeing snow lying on the junkyard lit by moonlight to point to something beyond our world and deep inside his soul. He is arguing with the cynic who tells him there is no mystery that it is overflows his cup. It is close to how I feel as I spend my evenings gazing at the wonder of the Creation Dream of The Lions Head and pondering the Destruction Nightmare of Humans on the streets of townships where people are dying of HIV/AIDS, oppressed ‘neath the injustice of my wealth and living in hardboard and cardboard. I’m deep in the mixed themes of Cockburnand wishing he was here to make my confused cocktail of emotions rhyme. And as if on cue the song concludes, “So all you stumblers who believe love rules/Believe love rules/Believe love rules/Come all you stumblers who believe love rules/Stand up and let it shine/Stand up and let it shine.”