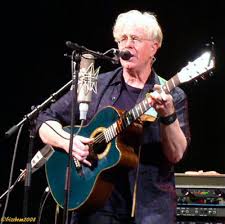 Bruce Cockburn close up. My word! I was in the front, right underneath the stage. My friend said I could have looked up his nose. I guess I could but from the moment he walked on stage I was completely distracted. Cockburn has this unique combination of being an articulate poet and a brilliant guitarist. Not many can put those together. He also has, though it might be said a lot of his songs don’t have a radio friendly sound, the added ability to pull out a memorable melody. There is so much to admire that you don’t know what to concentrate on. He beats out the rhythm on his guitar and with near sleight of hand (you wonder is there another guitarist behind the curtain) picks intricate tunes, then overlays them with rhyming couplets that any great poet would dream of. And we are not finished yet… into these couplets he sets social commentary, political rage and spiritual theology as well as being able to look in the depth of an ordinary man’s heart and soul and talk about love and loneliness, joy and pain.

Tonight Cockburn unleashed sermonette after sermonette making me think that it would make a great book to look at his theology of sin and redemption. He is ever aware of a fallen humanity and describes it well – “Terrible deeds done in the name of tunnel vision and fear of change/surely are expressions of a soul that's turned its back on love (Put It In Your Heart) and I was born on a Friday and you can’t fix me” (Mystery). He is also aware that in the midst of that we can find a spiritual hope that allows us to dance in the dragons jaw, “thinking about eternity, in the middle of this ecstasy” (Wondering Where The Lions Are) and “What does it take for the heart to explode into stars/One day we'll wake to remember how lovely we are” (Wait No More) and always looking beyond with eschatological hopefulness – “Today these eyes scan bleached-out land/For the coming of the outbound stage/Pacing the cage (Pacing The Cage) and“Fold me into you, you know where I'm dying to be/When my ship sets sail on that ocean of deep mystery” (Wait No More).

And as well as traversing the soul, a Cockburn gig allows more air travel than a television holiday programme. Tonight he takes us to Tokyo in the song named after that city and then to Nicaragua. Dust and Diesel is an intriguing choice for this. As fans no doubt clamoured for the better known song of his eighties trip through Central America as documented on Stealing Fire, If I Had A Rocket Launcher, he gives us one of the less esteemed brothers. Set lists of people with 25 albums will always have you picky about what is left out. Tonight I was more surprised and thrilled by what got put in. The songs off You’ve Never Seen Everything particularly came alive with the more stripped back sound. From Central America we headed to the Middle East. Cockburn is not an artist who prostitutes world events just to feed his songs. He likes to go and see for himself. This Is Baghdad is one such song; in it he simply describes the scene in his best travelogue way. How many times after a song like this have I found myself in some far off place staring at beauty and injustice side by side and whispering, “I wish Bruce Cockburn was here.” When he gets us to Baghdad he then takes us right into his commentary on it where he asks George Bush and his aids to tell God what they’ve done. (Tell The Universe). It is an interesting take because rather than damn the Whitehouse power brokers out of hand he almost sympathizes and encourages them to seek help for their psychological insecurities – “You've been projecting your shit at the world/Self-hatred tarted up as payback time/You can self destruct-that's your right/But keep it to yourself if you don't mind.”

Starting with a mystical tune from the late seventies Wondering Where The Lions Are Cockburn ended, (before encores) with another mystical song, this time his most recent; Mystery from his most recent album Life Short Call Now. It is a gorgeous spiritual search and find and invitation to join in that. In the midst of the awareness of his brokenness and apprehensions of this world and the next he sings – “Infinity always gives me vertigo/And fills me up with grace.” Everything else he says and sings is wrapped in the spiritual grace and wonder of those songs. Particularly interesting tonight is his environmental anthem If A Tree which gains maybe the biggest applause of the evening. The more recent Beautiful Creatures is also powerfully poignant.

One other comment before conclusions. His introduction to Life Short Call Now gave me an insight into the loneliness of the road. It lead us and Bruce to remark how many road songs he has written from and about and how much of his life then is between places on his own. There is a sacrifice to this life. It is not at all glamour and wealth and fun for the troubadour who heads out into the world to share his insights. And I guess it made me more thankful for Bruce Cockburn. Yes, I had paid a ticket price but he has given much more for us to meet at the front of that stage in Belfast’s Empire. He’s a long way from home.

I have written it before but while introducing Bruce on stage at the Greenbelt Festival I declared, before the man, himself that he had "prophesied into my world, provoked my mind, preached to my heart and pastored my soul.” And that is exactly what he did tonight. Like no one else can. His musical adeptness and his poetic articulation is drenched in spiritual and worldly wisdom that tells us much of what we need to hear. So Bruce, I know it’s lonely out here but don’t make it so many years before you come back.