Home Archives Profile Subscribe
OUT OF THE BOX MAD... BEYOND NORMAL, NICE AND GOOD...
OPEN BLOG TO THOSE INVOLVED IN INTER-PARTY TALKS AT STORMONT 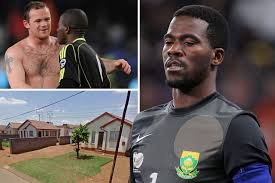 I heard last night on Breaking News on Sky Sports that Orlando Pirates goalkeeper Senzo Meyiwa had been shot dead. Meyiwa was also goalkeeper and captain of the national team. For those who don’t know, the Orlando Pirates are one of the top soccer teams in South Africa. The Pirates and The Kaiser Chiefs are the two biggest clubs, are both based in the Soweto township in Johannesburg and have a fierce rivalry.

In 2000 on my first trip to Cape Town townships I was fascinated that Cape Town’s black community supported these teams from hundreds of miles away. The townships overflowed with Chiefs and Pirates shirts, mostly Chiefs it has to be said. The contrary in me was drawn to the Pirates. I started wearing Pirates shirts and hats and it gave me strong connections wherever I went.

I loved Cape Town. It consistently stunned me with its beauty, at least on the days it wasn't misty and raining. Yet, it had its dark side. The first time we were robbed (yes, there were a few) I started writing the short poem below. My initial anger was seeking justice and revenge. That evening though we went to a Ronan Keating concert! Forgive me but I had a friend playing in his band and some of the students I was with loved it. When Keating sang Elvis Presley’s In The Ghetto I was stopped in my tracks.

In The Ghetto is the story of a child born in the poor side of town and a mother who fears that the poverty will drag him into crime. Originally titled The Vicious Circle the song humanises the criminal, a hungry young boy who ends up in crime and was finally killed himself. I realised as I listen that the crime that causes people to live in environments that lead them into crime needs my anger too.

The news of the murder of Senzo Meyiwa made me think of Underneath The Beauty. Once again the underbelly of the land I much love had raised its ugly side. Crime and murder are sadly to regularly a part of South African life. My students were to play a match against a team and when another team turned up we heard that the team captain, who we had played against the previous week, had been shot dead the night before.

Meyiwa was shot dead protecting his girlfriend, singer Kelly Khumalo, from a gang raid on her house. There is no excuse for his murder. It is the tragic cutting short of a young life. Yet, there is no excuse either for the world from where his killers came. Crime and murder flourish in the fertile soil of poverty and injustice. There is a vicious circle in the ghetto.

From underneath the beauty of the mountain

The underbelly of the ugly struck

Curse can pull a gun and shoot you

No matter your treasure trove of luck

The innocence of my trust was violated

My soul left battered and broken

I came to this city all wide eyed

In the heat of my cold blooded anger

I want to catch them and never let go

Then an angel with the voice of Elvis

Sang a song called In the Ghetto.

Hi Steve. Hard to get a balance and all the nuances in these situations. The longer I live here the more I realise how little I know - if that is not too Irish! There is a lot going on in SA at many different levels and it is difficult not to come to conclusions that are too simplistic. In fact, we can only really grasp things that are simple so we resolve everything down to one or two variables. I still think the best writing on the complexity of murder here is "Cry, the Beloved Country" by Paton. It is a picture, a story, and can capture a lot more of what is going on than a reasoned argument.
Yes, in SA we live in a deeply disturbed society in deep trouble, but then maybe that's not too different from NI and the rest of the world!