MARIANNE FAITHFULL - GIVE MY LOVE TO LONDON 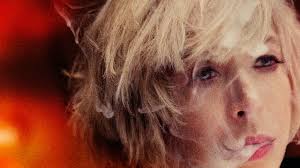 I am intrigued by Marianne Faithfull. A couple of summers ago I read not one but a couple of her biographies. She fascinates me as a chronicler of those heady London days of the Swinging Sixties. It’s an era I love and often pretend to be researching for a novel when I indulge in its pop history.

Her place in that era that fascinates me gives her a place in my musical world now. When I bought her 20th album it was as much for the he near holy/unholy icon that she is as much as the limited often coarse voice that she carries. Yet, Faithfull makes records that have artistic interest. She is like the female Leonard Cohen though nowhere near as old and a whole lot more surprising that she is with us!

Indeed she uses a Cohen song, Going Home but it is her collaborations with Nick Cave, as she has done before, the younger edgier Anna Calvi and Steve Earle that bring the real musical intrigue. Earle brings a country looseness to the title track, Calvi adds popped up guitar on Falling Back, a recent success on Later… With Jools, and Cave’s piano melancholy on Late Victorian Holocaust is perhaps the marquee song.

Just as U2 went back to their youth for inspiration on Songs Of Innocence so Faithfull went back to her London days. Not somewhere she would like to go back to London haunts Faithfull’s life and if you’d read the biographies I’d read you’d understand.

What I remember being blown away about from her writings was how she was absolutely flabbergasted that Edward Fox should become a Christian and leave acting after his role alongside Mick Jagger in the sexually pioneering and controversial film Performance. Everything went in the Sixties accept the outrageous idea of Christian faith!

“A child breaks the ice and peers into the hidden depths

I'm trying to decipher the horror of un-holiness

I have no doubt you'll figure it out someday”

Marianne Faithfull’s 20th record is a woman wrestling with her past and still questing in the present. It is as fascinating a record as the life it describes. Far from perfect it is rough edged enough to tell us much about the 60s and whatever we call this decade too.