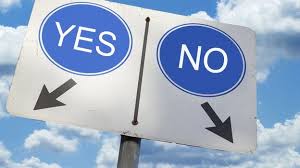 (this morning's Pause For Thought on BBC Radio 2 with Vanessa Feltz... The theme for the week is 'momentous decisions' but I couldn't mention the big vote!!!!!)

I was 8 years of age. I look back now and think it had to do with the fact that the guy next door was a couple of years older and a bit of a hero. It certainly was momentous. I changed my soccer allegiance from Manchester United to Manchester City. City had just won the Cup. It looked good and then… They wouldn’t win it again for another 40 years! I went through at least 30 years of absolute misery. In 1999 we were two divisions down as United won the Treble!

Yet, I have to say that when Sergio Aguero scored in the fifth minute of injury time to pip United to the Premier title in 2012 that momentous decision in 1969 paid off. I was in the garden because I couldn’t watch BUT the cheer unadulterated joy of that day was worth all the pain. Thank you Derek Cunningham for giving me that moment. As the Bible says, you reap what you sow. Every decision has a domino effect for good or bad. It makes me fear for all the 8 year olds currently opting for a trophy winning City. You have to be careful the decisions you make!

A few years ago I had another momentous decision to make. A Church showed an interest in having me as their minister. I was comfortable in University Chaplaincy and I never thought I would go back into a parish. Yet, this Church was creative and maybe just imaginative enough for me to fit. Still, it would be a momentous decision. As I wrestled I listened over and over to a song by The Killers called Human. They sing

I took their advice. I closed my eyes, meditated, pondered and prayed. I cleared my heart looking for the right motives, seeking the selfish things within me that might blur my choices. I then eventually had to cut the chord of my safety and jump into the unknown, knowing I wasn’t jumping blindly but had considered the decision in the right way. It has been momentous.