Home Archives Profile Subscribe
MOMENTOUS DECISIONS; How To Make Them? - Pause For Thought 18.9.14
HOW TO READ THE BIBLE

FROM IRIS TO CEDARWOOD ROAD - THE HEART OF U2's SONGS OF INNOCENCE, PART 4 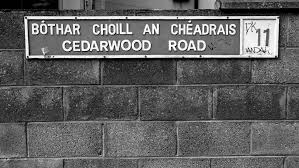 Cedarwood Road is the song on Songs Of Innocence that brings some resolution. Actually this song is where salvation comes, in literal ways. Bono’s grief begins in Iris (Hold Me Close). The anger is ready to erupt on Volcano. Raised By Wolves adds national trauma. Cedarwood Road continues the running, with fear and soul searching but a cherry blossom opens another world.

In the album’s liner notes, so often quoted in this short blog series, Bono writes about the Rowen family at No. 5. He calls them an “Old Testament tribe.” He is so right. I have had the privilege of getting to know some of this family. I think I once made a plea to be adopted as a 50 year old brother! They are Old Testament in size (10 children meant that like the tribes there were 12 in the house!), their deep roots of faith and the drama of their lives.

This family it would seem gave the young Paul Hewson a place, and tribal meals when life with his dad and brother who was 8 years older was not much like family. Guggi became Bono’s best friend. Cedarwood Road is dedicated to him and don’t lose the nuanced lyric, “and a friendship once it’s won… is won… is one.” Do you see that switch in spelling? I learned from a Rowen recently that U2’s song One was written about Guggi too. This seems the proof. So Andy Rowen has two songs about him. Guggi two about him. Old Testament tribe, indeed!

As well as a friend for life in Guggi, Bono got so much more from this family. He has spoken about heading off to Gospel meetings with the Rowens and this it would seem is where Bono’s had his earliest experiences of evangelical Christianity. He writes in the liner notes, “In their company I saw some great preachers who opened up these scary black bibles and made the word of God dance for them, and us.” In the song he sings, “Cymbals clashing, Bibles smashing/Paints the world you need to see.” Brushing Lou Reed and the Rowen family together in the liner notes Bono concludes, “Lou Reed, God rest his soul, said you need a busload of faith to get by. That bus was full of Rowens and I was on it.”

Salvation is expressed on Cedarwood Road with the key lines, “And that cherry blossom tree/Was a gateway to the sun.” Make no mistake the gentle but strong Biblical faith of the Rowen family alongside the Christlike grace they showed to a teenage boy in a dreadful personal place had an impact that they could never have imagined. The Rowen parents, Robert and the gentle Godly Winnie, remind me of Andrew in the New Testament Gospels. It was Andrew who introduced his brother Peter to Jesus. Peter became the one with the widest influence but Andrew was the “gateway to the son!” The very ordinary way that Robert and Winnie Rowen loved their neighbour has changed millions of lives around the world. Quite an example to us all!

Before Bono ever thought he could change the world he believed he could change the world in himself. That change was energised by his Christian commitment. Cedarwood Road was the sacred ground on which his rebirth happened. Don’t miss the last line of the song. For me this is the genius line on  a record that is filled with spiritual gems. In capital letters on the lyric booklet, “A HEART THAT IS BROKEN, IS A HEART THAT IS OPEN.” I have found this to be absolutely true. Those who have been broken are usually more sympathetic and grace driven in how they treat others. Bono’s brokenness as honestly exposed in the very raw emotion of these four songs at the heart of Songs Of Innocence made him the man who would be so open to the needs of the marginalised of our world.

Dear Steve, thank you so much for your 4 written parts about the new U2 album. Because you know more of their history the songs come closer to me! I'm again touched by this new U2 album, also in my life with God. Many years now I see U2 as an important source to understand more about God and the reality of life. For a couple of years I have your book. I really helped me a lot. This year I organized for the first time a U2 retreat in the Netherlands. With some dedicated U2 fans\Christians we listened to the music and during devotional times we found God in the U2 music. Blessings. Jan

Hi Steve. Love your ideas which resonate so closely with mine. What about the line 'God knows it not easy, taking on the shape of someone else's pain..' Don't you think that even in a song about suffering domestic violence this is also a direct allegorical reference to the cross and to the divinity of Christ?

I built my dream and lived it...a home for the old sick and dying Dementia senior citizens.

For a decade, 6 seniors at a time lived in my custom built lakeside retreat. It was like “Hotel California” and “She Talks to Angels”, I found myself living in “God’s Waiting Room”.

I lived with the dying and they taught me more about living than I could have ever imagined.

To love is the greatest gift there is in life.
The cost of love is tears,
Some tears are happy and some are sad.