FAULT LINES... RUNNING UNDER MY LIFE 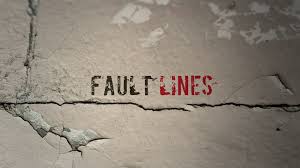 This Tom Petty & The Heartbreakers’ song has been rattling around my brain and soul since its release this summer. It is a great song and this is a great image. Petty has lived in California for some 40 years and that idea of the San Andreas Fault lying beneath you all the time could be a frightening thought if you allowed it to linger. Over 200 people have lost their lives in earthquakes in that State since I was born in 1961.

Petty’s song though is not about tectonic geographical shifts. He is using the image to dig deep in his own life. Another song on the same Hypnotic Eye album goes, “Meet me tonight at the Red River/And look down into your soul…” There is a lot of soul searching going on here and so I looked deep down into mine.

Fault lines are not necessarily sins. They are those things that have made up your core. They are events or circumstances that have happened to you or around you that have somehow bruised, broken or beaten out of shape your soul. They might not be bad things, just circumstances but until we come to terms with them we live on top of the potential danger.

My old history teacher Bob Mitchell probably didn’t teach me much history but a phrase of his has lingered with me since I was 17. He once told us that any great human being was someone who was aware of his or her weaknesses. A great boxer, he went on, knows that vulnerable spot, maybe a vulnerable eye that can get easily cut. Knowing this weakness he will defend that eye. It will be vital if he is to be a champion. I have many times taken that advice and looked deep inside and asked where there might be fault lines; because of where I was born; the family that I was raised in; my social class; the creed that I was spiritual formed in; the political ideology I was steeped in; the era I was born into. For me, among many others, one of the crucial fault lines is that I am an only child and that brings with it all kinds of formations at my core.

When Jesus encountered people he was intuitive about their fault lines. He meets the Samaritan woman at the well in John 4 and he opens up her fault lines. She is a Samaritan and a woman who came to the well alone in the heat of the day. He had a few clues as to where to bore into the strata of her life. It is all very different than Nicodemus’s fault lines in the previous chapter of John.

Before pastoral care or spiritual formation can be effective there is a need to analyse the fault lines. For me personally I have to be constantly searching my own fault lines. I need to be aware of them if I am going to allow God’s objective redemption, that is mine, to become subjective in how it works itself out in my living. Then as a pastor, my pastoral care cannot be a one fits all blue print. Every member of my congregation has different fault lines and to care for each is going to need a different approach depending. Any pastor will benefit when his flock are good in their own self critique and awareness of the fault lines running under their lives.

Oh Yeah! Good one, full of candour and insight.

Very true. We need to be aware of our own fault lines and do our best to understand anothers. Also as you say "no one size fits all" and it is a different approach to all. There are no "standard answers" that suit all.