SINEAD O'CONNOR WANTS A CHURCH TO HEAL NOT HURT 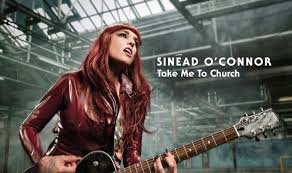 “I don't wanna love the way I loved before,

I don't wanna love that way no more

I don't wanna sing them the way I sang before

I don't wanna sing that way no more,

I don't wanna be that girl no more

I don't wanna cry no more

I don't wanna die no more

Take me to the church,

I've done so many bad things that hurts

Take me to the church,

but not the ones that hurt

'Cause that ain't the truth

And that's not what it's worth

Yeah, take me to church”

- Take Me To Church by Sinead O’Connor

Sinead O’Connor is at it again. Whatever you say about this fragile eccentric Irish woman she is always provocative. In recent years she has been adding spirituality to that provocation. She has done her Theology album of Biblical songs, a reggae record leaning heavily on Rastafarianism and her last record had some spiritual insights particularly on Reason With Me and VIP. Let me also point out that she has done two covers of Bob Dylan songs from his “Christian” period, I Believe In You and Property of Jesus.

The first track to be heard from her forthcoming album has hit the social media and it again has a Gospel feel. This is the song of a woman seeking rebirth and redemption. She is aware of the hurts that life has caused her and the things that she has done. She longs to be transformed.

And so where does she think she will find her salvation? Church! What is different about O’Connor’s view of Church is that she knows it is where her hope lies but she is critiquing its failing too. For some the Church is beyond criticism. For some it is a curse of humanity. Sinead knows its worth but is aware that some Churches hurt more than heal.

It is that “but not the ones that hurt/‘Cause that ain't the truth/And that's not what it's worth…” that has fed some of my surmising this week. As a minister of a Church I am asking are we a Church that hurts or heals? Are we the Church that Sinead could find the grace she needs to become the new creation she yearns to be?

I sometimes fear that we have become a Church where the Sinead’s are unwelcome. I fear that if they don’t fit into some behavioural code that we have somehow set up then there are many who get hurt rather than healed; they receive rejection rather than welcome.

As Sinead’s O’Connor’s new song sends me back to The Gospels to wrestle with her soul provoking lyric I am asking if people who come to my Church encounter Jesus or the Phrisees? Jesus will embrace Sinead O’Connor in her longing for change. The Pharisees would have added to her hurt by locking the doors in their judgements and codes. Jesus got to the heart of this with his parable of the Pharisee and the Publican. I pray God that Fitzroy will always be a place that heals the hurts and doesn’t add to them; a place that reveals Jesus to every Sinead that seeks to be taken to Church!