UNIONIST WALK OUT...THE QUEEN WELCOMES THE IRISH... QUESTIONS TO US ALL 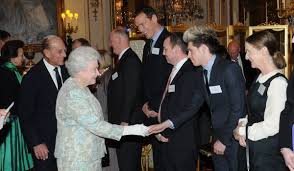 Unionism is about a loyalty to Britain and ultimately the Queen. Is that loyalty to a figurehead or is to the leadership of the Queen? The Queen’s state visit to Ireland in 2011 and, ironically in the light of this week’s events, her use of the Irish language was a seismic change in relations between Britain and Ireland. The Queen modelled a leadership that overturned centuries of hostility and ushered in a new day of changed relationships. Is it not now right that those loyal to her and proactive in their desire for Northern Ireland to maintain the Union to Britain to live in this new dispensation? Should Unionists and Loyalists walk out of meetings because they believe that they are being ignored or are they indeed ignoring the lead of she who they are being loyal to and desire Union with?

Don’t get me wrong, I have some sympathy with my Unionist and Loyalist friends who feel that the changes at work around them have somehow disorientated them and made them feel ignored. They might even have a genuine feeling that they are somehow being left behind. We need to be aware of such feelings but we also need to be asking what Unionism and Loyalism should now look like, if those are the names they wish to be identified as, in 2014. As the Queen and Britain’s lead shifts how does Unionism and Loyalism shift with their monarch and people? Are their leaders who can bravely lead in such a tricky terrain and navigate through?

How does the Church pray for and pastor such leadership or those who feel the brunt of the changes in our Northern Irish society? Questions… many questions…

It's fair to say though that the speaker at the meeting was a Unionist, whose comments regarding the walkout were rather more mature than the media and Nationalist reaction! And indeed, only three Unionist councillors actually walked out. Bad publicity for the UUP - maybe they should take a leaf out of the Sinn Fein book of walkouts and claim they needed the toilet!

I'm in two minds regarding the Irish language... I might have no emotional connection to it, but I do have an intellectual interest, and it is a shame to see it so heavily politicised. Linda Ervine's attempts to counter this are laudable, but I do wonder if its main attraction is its political potency. It certainly seems to be used as a way of marking territory/showing domination.

Interesting to see the Irish Republic moving away from it quite dramatically, and chatting to folks from across the border it's striking to hear them talk about Irish as a bit of a pain!