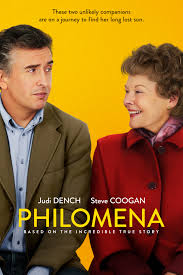 So it took a flight to America for me to get to see Philomena. Janice and I are not big cinema goers. Life in ministry is about people and evenings off are rare. Trying to add an evening out to our schedule is never easy and therefore a rarity. Even the Fitzroy Film Club heads out on nights that we are already booked and so I get to the end of Philomena and realise that I am way behind time in blogging about it now but boy does this movie need to be blogged about. Let me blog it in two parts. The issue of forgiveness that raises its head at the end of the movie is absolutely crucial to the Northern Ireland situation that I skirt around the edge of in my life, ministry and blog. We will get to that…

First, let me look at the issue of God in the movie. I often write about a transformative moment in my life in Cape Town when I touched the shoulder of Cindy as we prayed for her. Cindy was dying of AIDS and as I thought I was helping her I was suddenly infused with an energy from her that was for me redemptive and Divine. I suddenly realised what Jesus was on about when he talked about meeting him as we connected with the poor and marginalised in the Parable of the Sheep and Goats in Matthew 25. God meets us in that connecting moment.

That is what happens to Martin Sixsmith when he helps Philomena Lee look for her lost son in an almost selfish means to find work, having lost his vocational credibility in a political scandal. The sophisticated, educated, wealthy and English secularist shows patronising contempt for the simple ordinary Irish Catholic. The film shows a turning of the tables as Philomena confronts Sixsmith with his prejudice and weaknesses.

A couple of lovely moments to illustrate. As they are driving along Philomena pierces Martin’s cynicism about God by asking straight out, “Do you believe in God, Martin?” You can see Sixsmith ponder that around his mind and he responds with how complex a question that is and how difficult he finds it to give a simple answer. “What about you Philomena?” “Yes!”. It is beautiful.

As the movie continues that simple “Yes” reveals a confidence and profundity. Sixsmith gets more and more frustrated with how Philomena speaks about it and lives it out. At another point she asks him to stop the car as she wants to go to Confession. By this stage Sixsmith is exasperated at Philomena’s faith in spite of what nuns have done to her in the past and indeed, as the movie progresses, even in the present. As she gets out of the car he gives an anti-God rant that concludes by asking her to ask God what he has to say to him. Philomena leans back in and says, “I think he would say you are a feckin’ eejit!” Utterly brilliant!

What we need to remember in these dialogues is that we are hearing them from Sixsmith’s perspective. Ultimately, through his own awakening to this women’s simple faith, he portrays Philomena’s faith as something that transcends the Church’s shortcomings. The movie is as much a deconstruction of his own arrogant snobbery, intellectually and spiritually, as about Philomena’s strength of faith in God and in other people, even in people who have badly mistreated her.

Get to see it before your next flight to wherever!

Philomena was interviewed on BBC 5 Live yesterday by Richard Bacon - great to hear her, worth listening to on the podcast.