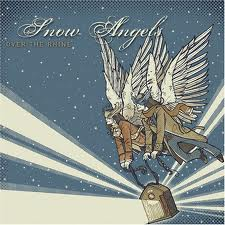 I have a recurring bee in my bonnet that Christmas is for all the year round and that it must have taken the devil to cause us to confine the richness of its incarnational theology to a few weeks in December. The depth of theological energy that infuses the poetry of the nativity should not be left in the attic in boxes. Over The Rhine make Christmas records for all the year round. And I do mean records plural. Over The Rhine love Christmas. They do a traditional tour at that season and this is not their first Christmas record. The Darkest Night Of The Year was their first in 1996, Snow Angels is from 2006 and they have a third planned for 2014.

The literate songwriting of Linford Detweiler and Karin Berquist lends itself wonderfully to every aspect of Christmas.  On Snow Angels you can smell the chestnuts roasting, see the snow on the trees, as you peer through the curtains from your chair beside the warm glow of the fire blazing in the hearth. You can see Linford at the family piano and Karin leaning beside the fireplace. These songs conjure the season but avoid the over familiarised blanding out of old carols. Somehow they have written songs that can house the images of winter and proverbs of faith without confining them to either.

There is a prayer for a New Redemption Song, “Won’t you help us please/Help us just to sing along/A new redemption song” and the “Forgiveness from the sky” that is falling in Darlin’ (Christmas Is Coming). We end up in Bethlehem in White Horse and stay there in Little Town which starts as the traditional carol should but then does a re-write that has us walking through the dark streets of the war torn modern day city finishing with a medley of Jesus best bits, “Put up your swords forever/Forgive your enemies/Love your neighbour as yourself/Let your little children come to me.” Here It Is perfectly highlights this band’s ability to make the transcendent breathe in the dirt and straw of this world which makes them the most incarnationally qualified to do a Christmas album -“When they blow Gabriel’s horn/Rip fiction from fact/I want to get caught/In some radical act/Of love and redemption/The sound of warm laughter/Some true conversation/With a friend or my lover.” I want a load of that… and I want it all the year round.

Steve a great review of a couple of awesome musicians and wonderful music.
Merry Christmas from a new fan of yours
Take a sec to kick back and cool out with silent night :)