Home Archives Profile Subscribe
STOCKI SURMISES GRACE; THE OXYGEN OF ANOTHER WORLD BUT WE LIKE BREATHING OUR OWN
GEORGE HARRISON'S SGT. PEPPER PREACH 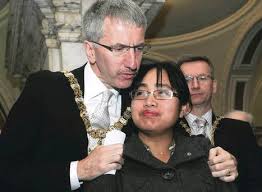 (this morning I was privileged to be asked by Tearfund NI to share a devotional thought at The Lord Mayor's Breakfast that Tearfund in partnership with Trocaire were hosting at the Refresh cafe at Skainos in east Belfast. It launched a day where the Lord Mayor is encouarging the people fo Belfast to support the people of the Philippines and recognising what the Philippino community has given to Belfast down the years. This is a mix of what I planned to say and then eventually did say...)

I owe The Philippines. It was a trip there in 1990 that changed my life and started me on a spiritual journey that led me to breakfasts like this one. My theology and views of my faith were contained in a match box until God opened my world view, understanding of Scripture and the reach of Jesus missional intent in the city of Manila and the island of Mindinao. I watched a three year old child, who lived in a house made of hardboard and tin, pushing a few peas around a plate. It was all she had or was going to have. I went rural. No electricity. Three people and a child on a motorbike taxi because there were no roads. I got caught up in a coup d’état and had to help push my jeepney over mountains. I saw the infrastructure of a different world than mine. When Typhoon Haiyan hit The Philippines my mind was back there among those shacks and on those mountain tracks. I had a glimpse back then but now I could only imagine.

Yet, those were not my first thoughts. While in Manila, I had the privilege of spending some time in Diliman Bible Church in Quezon city. A young women, in her early 20s, reported back to us how she had just returned from a mission trip to help people caught up in floods and storms. She told us about swimming flooded rivers grasping at telegraph posts and wires with a backpack of aid. As I make my pathetic contribution at a breakfast this morning, where getting out of bed before my children seemed unbiblical, I am aware that right now people are risking their very lives to help the lives of others.

When Paul explained to the Philippians (not The Philippinos!) that He wanted to know Christ he added two things; the power of his resurrection; and sharing in his sufferings. Christianity is not about the next life. That is a glorious by product. We are not called to heaven. We are called to follow Christ here on earth. Paul gives us insight into the desire that the Holy Spirit is looking for. First that we would have the thrill to live in the power of resurrection. The resurrection is about Jesus saying here is something new, powerful, transformative. We are bursting through the stone of the tomb into a new world of hope and change. We are to work with Jesus to make Resurrection life a reality on the streets of Belfast and the devastating wreckage of the Philippines.

What that means, Paul adds, is putting ourselves in the line of suffering as Christ suffered. The salvation of the world cost. A chapter before Paul spoke of Christ’s humility to become a baby in straw and to serve the world, even by being prepared to go to the cross. Follow me he whispers from every Christmas greeting you see in the next four weeks. Follow me. Swimming flooded rivers. And we are back to the Philippines and that girl from Diliman Bible Church.

A week ago we lost Fr Alec Reid, architect of peace process. A friend recalled this week how he had been at an event with Fr Reid where everyone was asked to say who they were and why they were there. Fr Reid answered, “I’m Alec and I guess I am here because I am always here.” As we remember Jesus birth coming up to Christmas that is what in some ways he was saying. This event is about God moving into the neighbourhood. God is always here. And us? Are we willing to be always there. Always seeking resurrection whether in typhoon devastated Philippines or the streets of our own city? Always prepared to suffer for the common good of all?

Let us be a Belfast that backs the Philippines and let us back Belfast too. Let us “want to know Christ—yes, to know the power of his resurrection and participation in his sufferings, becoming like him in his death, and so, somehow, attaining to the resurrection from the dead.”

Moving and interesting reflection from Rev Stockman, the joy at seeing massive unselfish cash donations through 'DEC' is humbling but NOT surprising.