GEORGE HARRISON - ALL THINGS MUST PASS 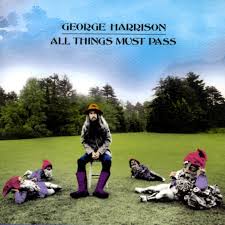 When they remastered and repackaged George Harrison's All Things Must Pass in 2001 I fell in love with it all over again. It reminded me of the utter magnificence of "third" Beatle’s post Beatles debut. A reminder too of the incredible output of the greatest pop band of all time. Before we get to George, let us consider the facts. These four Liverpool mop tops made no less than 12 studio albums in the 7 years that they were recording. Yes, maybe their early albums were churned out in next to no time with a few covers and a couple of fillers but there are still more classic songs in those first few years than most bands ever come up with. When they did start to take their time there was still a double album in 1968 and two albums in quick succession recorded in 69. Add to that that their singles in that period didn’t go on the albums and it is simple mind boggling in an era when bands like U2 can take 5 years between records. Add to that that in 1970 all four Beatles released albums and that Harrison’s was a triple and the story gets more and more convincing that The Beatles were the great song writing geniuses of the 20th century.

Harrison’s triple, the world’s first triple, did of course have that whole vinyl slab of rarely played jam sessions indulgence but it can be forgiven. For four sides he revealed beyond doubt that he had emerged from the shadows of Lennon and McCartney to make an album that apart from Imagine by John and Band On The Run by Paul, the famous writing team of Lennon and McCartney just never got close to in the solo years. Harrison, of course, had brought some fine tunes to the table in the latter part of the 60s. While My Guitar Gently Weeps was as good as anything on The Beatles (White Album) and Here Comes the Sun and Sinatra’s favourite ever song Something were easily the standouts of the fabulous Abbey Road. Quite how some of these songs never made those albums suggests that the most famous song writing partnership in pop were not just so keen to allow the youngest Beatles to steal past them on the song writing front.

So what we get in 1970 is the result of the great rock n roll laxative. The biggest band in history break up allowed Harrison to empty his song writing blockage. To hear it freshly remastered is to hear it in all its surprising beauty and big Phil Spector production. Harrison wrote in the Remaster's liner notes that he could be tempted to remix the whole thing. If his re recorded version of My Sweet Lord is an indication of what he might have done then maybe he should lock the tapes in a vault but you can see some of what he means. Maybe on What Is Life and Awaiting On You All there is a little pomposity. Maybe in hindsight though the title track All The Things Must Pass is not over cooked he might have seen something in The Beatles Anthology version that would led him to see that it should have been undercooked. But none of this should stop the thrill of this collection. Variety from the ballads like Isn’t It a Pity to the country influenced Dylan cover If Not For You and the opening co write with Dylan, I’d Have You Anytime, to the rockier What Is Life, this is an album as jam packed with quality as you are ever likely to ever hear.

Of course there is the obsessed eastern spirituality that has been evident in everything Harrison has done since and one wonders if it had not been the trendier eastern variety of deities that Harrison’s took to his heart would this have been so well received. My Sweet Lord even it did cost George half a million dollars for being to close to He’s So Fine is an all time great single and in some ways though it has it’s chanted Krishna improvisation it could almost be seen as a prototype for all the modern Christian worship that has brought about it’s very own industry. Simplistic but positively spiritual, the Chiffons never sounded so good. Indeed all his spiritual searching can be cross related to anyone seeking the transcendent.

Beautifully repackaged with 5 additional outtakes including the previously unreleased I Live For You and that reowrked My Sweet Lord (I even find that intriguingly lovely), the remastered sound lifts the instrumentation and brings a fresh sharpness that only increases the brilliance.

If you only buy one post Beatles album then this is the one.