Home Archives Profile Subscribe
OVER THE RHINE ON PREACHING CORRUPTION OF CHRIST
SCEPTICISM OR CYNICISM? WHAT'S IT TO BE? 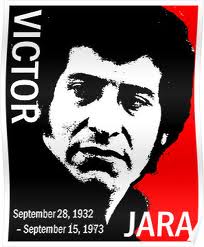 - from Victor Jara by Christy Moore (written by Guthrie/Mitchell)

Christy Moore is an Irish singer who sings of Irish ways and Irish issues but he does not limit himself to songs of oppression at home. He has collected, performed and recorded songs about various freedom fighters across the world. Biko Drum about Steve Biko and a nod to Mandela in South Africa, The Disappeared mentions the martyred Catholic Bishop Oscar Romero and this song that seems to be a live favourite of Moore’s Victor Jara.

Jara was a Chilean singer songwriter like Moore. He used his art to speak out for the socialist leader Salvador Allende who won the Chilean elections in 1970. A coup set up by right wing dictator Pinochet with the help of America overthrew Allende in 1973. Allende featured with Jara in a Moving Hearts' song Allende. Many of Allende’s supporters including Jara was taken to the Chilean national stadium  where they broke the bones in Jara’s hands so he couldn’t play guitar and asked him to sing, similar cruel fun poking humiliation that Christ experienced at his cross. Jara sang We Will Win and they beat him some more before riddling his body with 44 bullets and dumping his body in the streets. In 2003 the stadium was renamed Victor Jara Stadium. Christy Moore’s sings it with a beautiful defiance full of dignity and inspiration.

Christie Moore sings a song about a man tortured and then riddled with bullets? Hypocritical tosser.

He's made enough money singing songs supporting innocent people being tortured and riddled with bullets. I hope the likes of Moore won't win even if they do make a mint from the misery of others -, Irish Fascists, Chilean Fascists, same bloody nonsense.

You've probably been this, but it was Bruce's tribute to Jara during his concert in Santiago on 12/11 - http://www.youtube.com/watch?v=6zX2L-RiGRI