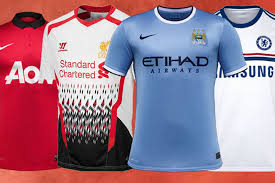 So the new Premiership season starts today. Not before time. It seems like years since City lost to Norwich at the end of last season! This season excites me. So much has changed. There are so many differentials. The top 3 teams from last season have new managers for goodness sake. It could be the most interesting and open Premiership for years. Bring it on!

As I surmise the season this morning I would say that my precious Manchester City are strong favourites. However, I am not convinced they will be in such a strong position by the end of the transfer window. The last two seasons have been won in pre season. Two seasons ago City sneaked their first title in 44 years when they bought Sergio Aguero, and no doubt many would say 25 other players over three years! Aguero just swung the title, revealed visually three minutes into injury time in the very last game. Last season United took the title back (and I nearly did type “their title” just there) when they bought Robin Van Persie. If City had got him then the season would have been very different and Mancini knew it, using it as his excuse all season and maybe getting sacked for saying it! In recent years we have come to realise that the strengthening of even title winning teams is a vital contributor to the destiny of the following season.

This pre season, so far, has been won by City. Four great signings have made them a much stronger squad with more options and cutting edge than they showed last season. The rest of the transfer window so far has been dominated by the yawn of daily rumours of where Bale, Suarez and Rooney will or will not go. It has been a sign of a lack of movement. If that lack of movement continues for two more weeks City will only have the eccentric genius of Jose Mourinho to worry about. Chelsea took pole position when “The Special One” was reappointed. Moyes and Pellegrini haven’t the CV that Jose has. Yet, Pellegrini’s signings just tip it, in my opinion. Chelsea are a better team than their last campaign showed but still need a player or two and Rooney won’t frighten the top teams I don’t think!

I find it hard to write but I would like to see Moyes do well. I think it is United showing a set of values that I don’t find too many opportunities to commend them for! As all the rest have gone the way of Europe and opt for short term managers but United try to follow the long term loyalty that worked for Sir Alex. It would be nice if it worked again. It would be a victory for values that my team threw out awhile back (maybe 1978!). Whether it will or not is the question though! The pressure is on young David. Had he signed Fabregas I think they would have swung it back from City. United, and I am glad United fans have agreed with me, have lacked a brilliant midfielder for a year or two. And... before you say it... yes, they walked the title without one! A Fabregas-like signing and they could be breathtaking. That is why City might no longer be favourites by August 31st. I am sure United will be doing all they can for a high profile signing and Fabregas showed their ambition.

Of the other challengers, Spurs have strengthened very well though of course the Bale saga will be important to the strength of their effort. Arsenal need, and I think will, buy before the window shuts but it might be a transitional year before a real go at the summit next season. Liverpool will be much stronger too, though Suarez is their vital factor. I think the other fascination this season is that the “weaker teams” are stronger and might take more points off the top teams which throws in another unknown factor. I mean Fulham for example with Berbatov and Bent will be a danger on their day. This is what makes it all so exciting. Enjoy!

Thank you for some other informative web site. Where else could I am getting that kind of info written in such an ideal way? I have a mission that I am just now working on, and I've been at the glance out for such information.

It might sound strange adding mids and tops over a 'bass drum' however, if you listen carefully with a classic 909 kick you will learn a lot of its punch actually comes in the top frequencies, go ahead and run a low pass filter on a 909 and you will probably see that it sounds pathetic with out the most notable. and make sure you do Jack Daniels shots for no reason at all at all whilst preparing your meal. Hip hop was originally introduced instead to disco.

Set the coarse frequency of oscillators 1 and a pair of to -24. A tour can be extremely lucrative if you undertake it right, however, you need to know when you do it. The rise of mp3s saw an alternative way of housing your music collection, in organized and space saving electronic files as an alternative to massive records crates and bulky CD binders.