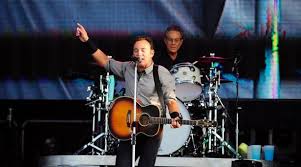 It was without doubt a recommitment to Bruce Springsteen. Not that I ever was a backslider. I have been a fan since my mate Rab committed his life to Bruce in the late seventies. I have been going to gigs since the near mythical Slane Castle gig in 1985. I absolutely loved the “Seeger Sessions Tour” (ed) twice. I have been an evangelist for his most recent Wrecking Ball record, deeming it as important a piece of social transformative rock music as has been released in many a long year. My review of Springsteen in Dublin in 1999 waxed lyrical but acknowledged a slowing down from the legendary athleticism of his earlier days. Well, 14 years later and I must confess I got that one badly wrong. At 63 years of age Bruce Springsteen goes at a rock gig at a pace and stamina that beggars belief. For three solid hours he rarely takes a breather as one song blends into another with seamless intensity, the band jumping, dancing, running’ lying on their backs with legs in the air! It is a remarkable spectacle and the sound is even more incredible. In a review of Tom Petty last year I suggested he might have surpassed Springsteen. Halfway through this gig I laughed at my stupidity, no offence to the wonderful Heartbreakers!

What Springsteen is doing is unique to rock music. He continues to progress, to mature, to get better at his craft, particularly the craft of live performance. Having lost E Street Band members Clarence Clemons and Danny Federici a decision was taken to reinvent. The addition of a horn section, including Clemons charismatic nephew Jake, and some Gospel singers has blended some of the Seeger Sessions sound into the Springsteen mainstream. In the end what Springsteen has done is to take his back catalogue and eke out every last sinew of their potential and meaning. It is as if the songs themselves have grown up.

This was particularly true with Reason To Believe. Another of Springsteen’s gifts is his relationship with his fans and in recent days he has been taking requests, written on card, out of the crowd. This has at times on recent tours caused very rare treats to be performed at the drop of a marker pen. Tonight Reason To Believe was his first request and it was a revelation. The song originally sparsely recorded for the Nebraska album became much bigger and robust, a mix of folk and rock but particularly the blues, like Springsteen was the inheritor of that American blues tradition, sharing the soulful sorrow and hopefulness of the human experience. There were other times when as I looked at the big screens and smiled at the smiles of a Belfast crowd, that was sadly aware that a couple of miles away there were sectarian tensions and riots on our streets, I realised that Springsteen has this ability to entertain while dropping deep messages into the hearts of his audience. Reason To Believe was followed by three more Nebraska songs and then later three songs in a row off Wrecking Ball. The struggles of the blue collar man and woman were laid out. This was blues, threaded through with soul. Take Care Of Our Own was a pumped up anthem that turned into the Gospel Revival that starting and finishing the concert with This Little Light Of Mine had declared his intension being! Rocky Ground was another moment of spiritual hope in the midst of despair that spoke directly into Belfast’s own peculiar problems.

It was an act of grace that I got to experience this phase of Springsteen. At midday I had no ticket and my intention was to sit in my garden about half a mile away and creek my neck to listen. That I received an indiscriminate act of kindness was not all. That act of kindness came from fanatics! I thought I was a rock fan. I have written a chapter in a book about him for goodness sake. Well I am not worthy to wear an anorak around these guys! Within an hour I was sitting in a queue in the hot July sun listening to chats about set lists and tour surprises with surmises of what we might hear later. Then at 4 o’clock, an hour before the gates were to open, we were in the enclosure before at 4.30 Bruce walked out and did a mini acoustic set. Again, even though I still question the price of tickets, Springsteen is certainly a man who goes the extra mile, attempting to give as much value for money as those ticket prices can. For me I took the short walk home overwhelmed that I had been there at all, more overwhelmed at being in for the sneaky pre show set and as close to a stage as I ever have been, but even more overwhelmed at the quality of the band, the performances of these songs, the connection with the crowd and the depth of goodness that the songs pumped out across a city in need of “the everlasting, ass-shaking, house-rocking unifying power of rock and roll.” Thank you Glenn, Mark and Heather! Thank you Mr Springsteen and his E Street Band. I for one am a believer once more!

She is known for her starring role on MTV reality series. 'Jeff, a lot of people hate you'especially Sarah Palin, because you remind her of what Trig's going to look like when he's 40. When asked if he has ever ghostwritten for Weezy though, Drake made it clear that work in the booth is collaborative.

02 software, which has been released, recently, comes with 4 key directories. you can't play your videos from the Music Library menus. The reasoning behind this is that games are going to be 'licensed' rather then purchased.

Curtis: There was a wardrobe girl that Colin dated, which he refers to in the diaries. The fact that he was married did not stop President Kennedy from beginning a rendezvous and his affair with the blond Hollywood dream of the twentieth century, Marilyn Monroe. You have to get out what you need to say whether it be right or wrong which brings us to the next thing we need to understand.