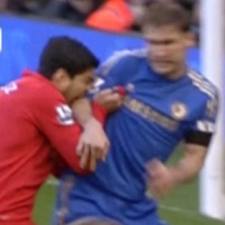 Let me start this Surmise by saying that I have Luis Suarez in my Fantasy League Team and I have been an admirer of his genius since watching him play for Uruguay in the World Cup. He is a unique soccer talent. Yet, he has always had this dark side. Whether his prolific diving or just always working round the edges of the rules he is shifty and cheeky and never behaves in ways that could immediately be used to defend the accusations against him of cheating. The racist controversy with Patrice Evra and a later refusal to shake hands with the same player was another step. That Kenny Dalglish, the then manager, supported Suarez might have caused him his job and the King Kenny crown in the Board at Anfield!

Today was another level, of a similar shock factor as Eric Cantona kung-fuing a fan at Selhurst Park in 1995. That Suarez would bite a player on TV was beyond belief. On a day when his pass for the first goal and almost last kick (or head) equalizer should have lifted his chances of player of the year he really should now be taken out of the short list for that honour, banned for 10 weeks and jettisoned from Liverpool at the end of the season! Soccer does not need this kind of publicity or example for the kids taking up the game. Liverpool are a club of better values that most; it is hard to believe that Cantona would have remained there after his behaviour.

However, Jamie Redknapp did highlight on Sky Sport that soccer has strange values and that Suarez might still be at Liverpool next season. That is very sad, disappointing and the answer to why these things continue to tranish the game. It makes it more and more difficult to defend the passionate support we give to soccer. Liverpool need to help the game get out of the gutter and be brave enough to stand for better things. That a Director of the Club suggested that it was not befitting of the shirt is a good sign. Suarez’ apology, to Chelsea’s Ivanovic, is too little much too late and probably a strategic way to avoid a lengthy ban. Soccer needs to get its house in order. How many times I have I written that. This is a no brainer. FA, throw the book! Liverpool FC show us you are still a great club and get rid of him. City, please NOOOOOOOOOOO!!!