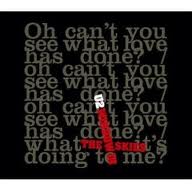 So, yesterday we left Jesus lying dead in a tomb. The disciples running and hiding and losing all faith in their disillusioned confusion. U2 were shouting Wake Up Dead Man which at least had more hope than Peter, James and John. In music history terms we left U2’s 90s catalogue behind. Wake Up Dead Man was their last album track for three years and then... Their first track of the new millennium was another reinvention and was actually dubbed by some reviewers a Resurrection Shuffle! How intriguing!

The lyrics were hopeful. There was a sense of something new. There was a spiritual reaching as if the he Psalm bluesman had given way to the Psalm devotional. Then there is the bird of resurrection from the last night the world was left so hopeless at the time of the flood. A great song for Easter Sunday for sure.

See the oil fields at first light
And see the bird with a leaf in her mouth
After the flood all the colors came out.

Years later U2 would return to the theme of resurrection more explicitly in Window In The Skies.

“The rule has been disproved
The stone has been moved
The grave is now a groove
All debts are removed, ooh

This verse going into the chorus is a theological beaut. I am presuming in its context that the rule that’s been disproved is that a dead man was raised again. The idea that the grave became a groove is a lovely little line following the stone has been moved and then that recurring theological thread in U2’s career – atonement, redemption, sins forgiven, debts dealt with.

The chorus is a declaration of what God’s incarnation, death and resurrection has done to the world... and then from the objective to the subjective – “what it’s doing to me.” These events and the theologies they create can have their impact on the minute by minute life of the individual. The new life starts here!

I've been blogging U2 songs over Easter also. Same but different:
Thursday - Until the end of the world
Friday - Pride in the name of love
Saturday - Wake up Dead Man
Sunday - Windows in the sky