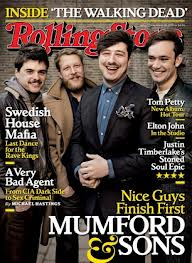 At the weekend, Drew Marshall on his Canadian radio show asked me if I thought that the “are U2 Christians” debate was over. I answered that I thought it was but that Marcus Mumford would now be the one that the Christian subculture would be arguing over.  Mumford & Sons two albums have been riddled with confessions, prayers and illusions to Christian faith. The Christian subculture has known for some time that Mumford’s parents were leaders in Vineyard UK Church and the charismatic evangelical nature of that Church.

In the current issue of Rolling Stone magazine, however, Mumford speaks in public for the first time about faith and will have gotten that Christian subculture all a tizzy. Though UK music magazines have no interest in discussing Christianity or spirituality, American journalists love it and, in the main, really understand it. So Rolling Stone asked Marcus Mumford if he considered himself a Christian.  Mumford answered, "I don't really like that word. It comes with so much baggage, so, no, I wouldn't call myself a Christian.” He goes on, “I think the word just conjures up all these religious images that I don't really like. I have my personal views about the person of Jesus and who He was. Like, you ask a Muslim and they'll say, 'Jesus was awesome'—they're not Christians, but they still love Jesus.” Mumford then describes himself as “a work in progress.”

That is a lot of fodder for that Christian subculture that loves to be obsessed with whether people are with them or not, always keen to claim celebrities as Christians but just as eager to close the Kingdom gate on them when they don’t shape up. Relevant magazine, dear to my own heart as publishers of my books, have already weighed into the discussion. Though making a few good points there is one line that is concerning. They conclude the quotes above about Muslims loving Jesus with this, “So, let’s recap. Jesus is awesome. Muslims are awesome for thinking that Jesus is awesome. But Christians? Not so awesome.” Now that is not what Marcus Mumford said or was getting at. It is little wonder he is concerned about speaking about his faith to journalists when even the Christian ones misrepresent him.

The first thing we have to do in such a scenario is ask the context of the statements. We all say things differently in different situations. The way we speak to our closest friends is not the same we speak in public places or indeed even with other friends. Marcus Mumford is being interviewed in a music magazine. Like U2 before him he is aware of how this will be taken. I heard once that when Bono had given a couple of Philip Yancey books to Noel Gallagher he told him not to mention it to the press as they don’t understand. Bono was saying that how you are understood in a rock magazine interview is open to more misunderstanding than on a one to one conversation with a friend over time.Even in my limited experience I am always on my guard against a pushy journalist looking for a quote!

Second, I have huge sympathy with Mumford’s response. One of my friends told me recently that he had asked his teenage son if he told his atheist friend he was a Christian and he responded. “It’s kind of hard, dad, to defend Christianity when you realise all that has been done in its name!” There have been times when I speak of myself as follower of Jesus more than a Christian because there are many things about right wing American Christianity that I don’t want to be confused with. Or even right wing Northern Ireland Christianity! In this interview Marcus Mumford doesn’t make any denials about Jesus, just about a perception of Christianity. Anyway, in the Bible Christians didn’t call themselves Christians, other people called them Christians when they had witnessed something of Christ within them. If I pick up a guitar I could call myself a guitarist. If I can play it so well that Eric Clapton says, “He’s a guitarist” then maybe I can take the name! Maybe what Marcus Mumford has issues with should never have been given the adjective Christian in the first place. Maybe!

Thirdly, whatever Mumford defines his own faith does not make the theological brilliance of his songs any less true. I have found Mumford & Sons songs very helpful in for my own mind and soul. I have even used them in a Communion liturgy. That line about grace, “It’s not the long walk home that will change this heart/But the welcome I receive with the restart,” is profoundly true and quotable no matter whether the writer declares himself in or out of Christianity. Either it is truth or truth becomes relative to who speaks it. When I was doing the round of Christian radio stations, at the time of Walk On being published, they could play U2 songs but not U2’s versions! That for me was much more concerning than anything Marcus Mumford said in this interview.

As a Church pastor I need to ask myself, and my God, what response I should have to Mumford’s interview. How do I care for and engage with his thoughts? Should I allow his words to interrogate how I am doing my faith and how the Church is? Or are there deeper questions lurking around the seismic shifts on “Christian” faith in our generation? Relevant’s Lillian Daniel had the right to declare that “It's OK to Call Yourself a Christian”  but I am not sure that the strap-line “Why Marcus Mumford’s take on the “Christian” label doesn’t hold up,” holds up. I don’t think that Marcus was making that call. I think he was maneuvering the tricky world of the press. For me Lillian’s article needs taken separately from The Rolling Stone one but, in the end, Marcus Mumford is not going to be the least bit bothered by Relevant or Steve Stockman or whether you agree with him or them or me! Maybe he is more secure in his beliefs about Jesus than those of us who have debate whether he is in or out of the Kingdom of God. Maybe!

I wonder if one of the images he didn't really like was the one of him as Poster Boy for the Christian subculture? I'm not a fan of U2, but the way Bono has neatly side-stepped that albatross for so long, he deserves a pint.

I've got sympathy for MM, negotiating a media industry that trades on moronic simplicity, and a watching Church that's often not much better. If he didn't divulge his inmost beliefs, joys and desires, and the precise details of his relationship with God (that probably defies words in any case), if he didn't stick on an easily-identifiable badge, then Big Whoop.