Lyric For The Day 20.2.13 from Waiting For The World To Change by John Mayer 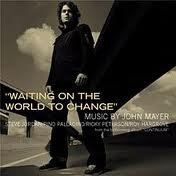 With the world and those who lead it

We just feel like we don't have the means

To rise above and beat it

So we keep waiting

Waiting on the world to change

We keep on waiting

Waiting on the world to change”

-       From Waiting For The World To Change by John Mayer

I am not a John Mayer fan and perhaps this lyric is one of the reasons. For me songwriters need to write songs that are not only good but good for something. Here, Mayer takes on the changing of the world but concludes that his generation is powerless to bring it about and will just wait around until they are the majority. That is not the spirit of the 60s songwriters who changed the world for good and, maybe at times, for bad but were all about the power to change it!

Perhaps Mayer sees himself as more of a victim than a criminal. In a Wikipedia article about this song he is quoted, "It's saying, ‘Well, I'll just watch American Idol because I know that if I were engaged in changing anything for the better, or the better as I see it, it would go unnoticed or be completely ineffective.' A lot of people have that feeling." Is American Idol, or in UK’s case X Factor, dulling the edge of revolution in our youth, with its need to gain votes from 8 year olds and 90 years olds to be a star, or is it the result of a youth already blunted by hopelessness? Or is it a vicious circle?

Whatever, those of us who dare to follow Jesus have no such luxury as wait around for change to come. We are called to bring heaven on earth, to redeem every aspect of our culture, to change the world. Of course the greatest danger for the Church is that followers of Jesus feel hopeless too. Not hopeless in their belief that one day things will change but hopeless to do anything now as we wait for the Kingdom to eventually come one day. The apostle Paul wrote to the early Church of such heresy and told them to get their eyes off what would happen one day and get it onto what they could do to change the world now. No waiting!

Perhaps he is simply stating how he sees it. That he sees people "waiting for the world to change" and not doing anything about it, rather than it being his stance on how to live.

Maybe it would be like God looking at Christians and saying "they are just waiting for me to return". He obviously doesn't think that is how we should live, rather that is how we (some obviously, not all) are living.

But indeed, regardless we can't sit around waiting. Especially if we start to see God's kingdom being something that is already in some respect present to us. We simply can't wait around because we're already (partially) there.

When I first started 19 years ago in the company I was made redundant from just last week, I created some winds of change, for the better, or I wouldnt have lasted 19 days, the owner of the business said to me, "yer doin good, people dont like change" he rarely spoke to me again. It was pointed out to me just before I left the building (uh hu) that it is written 'seek and ye shall find' In the space of two days I have found and applied for four suitable jobs. So I concur, NO WAITING!!