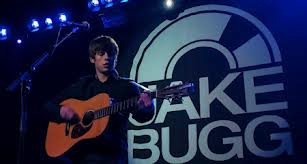 Standing in line outside the Queens’ University Students Union I asked myself when I had last queued to see a gig by a teenager. Answer... in 33 years of gig going... NEVER! That in itself suggests
the phenomenon that is Jake Bugg. After a super little set by Dublin brothers Hudson Taylor the house music in the lead up to Bugg wasn’t the average playlist of a teenager; Dylan, The Stones, John Martyn and Neil Young!

Bugg arrives without a smile and nothing in that facial expression changes for the jam packed hour. This 18 year old’s place in music
is on a stage not the cover of a teen magazine and he uses exclusively the vast range of his song moods to express himself. Watching Bugg you trace the history of rock n roll in the sound of a teenager on the cutting edge of his own era. The dark brown acoustic smacks of Dylan as do some tunes; The Beatles’ hairstyle hints at a young George Harrison as does the authoritative ease of his guitar playing . As well as the strategically placed sound explosions, there
are also delicate moments that conjure Simon and Garfunkel. In everything Bugg’s stage stroll has a Gallagher brothers’ gait that is added to by soaring anthemic choruses but Bugg’s depth of content and breadth of tunes take him to heights that Liam and Noel can only dream of. From all of this, Bugg flies through great song after great song – Fire, Trouble Town, Someone Told Me, Taste It, Two Fingers and Lightning  Bolt being particularly stunning.  In everything there is a nonchalance that also belies his age. On the second song of his encore this attitude finds perfect revelation when he breaks into Johnny Cash’s Folsom Prison Blues. Of course!

Don’t get this review wrong, Bugg is not an 18 year old born out of time. Though the Mandela Hall crowd is certainly wide ranging in age this dude, under all his influences, is totally now!  Jon Landau’s hyperbole phrase, “ I saw the future of rock n roll and his name was...” comes to my mind again and again through the set. I guess that is up to Jake Bugg. The world is literally at his feet and his varied artistic palette suggests he has the range to take it in various directions and never stagnate. It is all about his head... his heart...
and his soul. If he doesn’t get distracted by the temptations of wealth and fame that name Bugg could be gloriously infested across the future history of rock ‘n roll. I am glad I saw him in this intimate venue. The next time he’s in Belfast I imagine it will take a much bigger hall to contain the phenomenon.