Home Archives Profile Subscribe
Lyric For The Day 20.2.13 from Waiting For The World To Change by John Mayer
TOMORROW IN FITZROY 24.2.13

BEASTS OF THE SOUTHERN WILD - a review 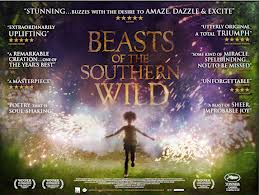 Beasts of the Southern Wild is a disturbing but beautiful piece. The low budget film by first-time director Benh Zeitlin is based around a young girl Hushpuppy, played, with remarkable poise, by 9-year-old Quvenzhané Wallis. It takes place in a Louisiana bayou, on the wrong side of the levee, called the Bathtub that is under threat from environmental apocalypse and said threat is realised. Hushpuppy is motherless and her relationship with her father is strange and at times violent. He is ill and this dysfunction of their relationship and the tragic storm that falls upon them all takes place in a context of chronic poverty. I did say disturbing! The beauty, that I also mentioned, is the surprise. Hushpuppy herself is beautiful. She is vulnerable, strong, innocent and worldly wise. The other menagerie of characters are equally disturbing and beautiful. Always seemingly drinking and drunk they are also always supportive and in constant solidarity; a real community.

Into all of this Hushpuppy brings poetry of childlike wonder. As narrator she says,

"When it all goes quiet behind my eyes, I see everything that made me, flying around in invisible pieces. When I look too hard it goes away. And when it all goes quiet, I see they are right here. I see that I'm a little piece of a big, big universe and that makes things right. When I die, the scientists of the future, they're gonna find it all. They're gonna know, once there was a Hushpuppy and she lived with her daddy in the bathtub."

On her place in that big, big universe she declares,

"When you're small, you gotta fix what you can."

For me the final scenes are what has lingered with me the longest. Maybe that is how every movie should be. Throughout the film Hushpuppy often gazes out across the water to a lighthouse in the distance and speaks, in a prayer-like way to her missing mother. Near the end with her father dying she sets off, with those dependable friends beside her, and attempts to reach the light. With help from a boatman she eventually does and ends up in what seems like a brothel. There she finds a woman who might or might not be her actual mother. They have a short time together when the woman cooks her some chicken but more importantly lifts her and hugs her tight. Hushpuppy narrates, "I can count on two fingers the number of times I've been lifted up..." She is told that this woman cannot look after her and she heads back, across the water, home. Arriving where her father is dying the wild beasts of the movie's title, that have made cameos throughout, descend on her. Hushpuppy stops but galvanised by the hug eye balls the beasts and conquers her fears. She then enters her father's dying presence with a tender compassion that has been birthed in her so that she can fix what she can. The lesson that once we are loved by someone we can have the strength and insight to love others is a powerful poetic statement in a story strewn with them. All of the disturbing, that has been, is redeemed in the beauty of the ending.

I watched the film along with the Fitzroy Film Club and elsewhere in the QFT was the Vineyard Creatives’ Home Group. One from each group spoke afterward about how their second viewing of the movie was even better than the first. I can believe that and I look forward to the benefits of years of coming back to it, building fresh wisdom from each new encounter. Wonderful!

When I originally left a comment I appear to have clicked on the -Notify me when new comments are added- checkbox and now whenever a comment is added I receive 4 emails with the same comment. There has to be a way you are able to remove me from that service? Many thanks!

When some one searches for his essential thing, therefore he/she wants to be available that in detail, thus that thing is maintained over here.

It was not chicken that woman cooked. It was gator.