Home Archives Profile Subscribe
Lyric For MLK Day 15.1.13 from Up To The Mountain (MLK Song) by Patty Griffin
Lyric For The Day After That Nolan Show 17.1.13 from Flat Earth by Iain Archer 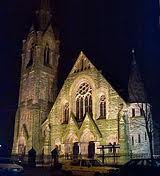 Sunday evenings in Fitzroy have become known for their variety, imagination, artistic quality and robust thinking as well as being relevant, often prophetic, in wrestling with a modern world with truth from an ancient text. Most Saturdays Soul Surmise tip you off about what is on the next day. Here is an advanced list of just some of what we are doing between now and Easter. (all events at 7pm unless stated)

Stephen walks us through the divisions of the Middle East. What do we Northern Irish Christians need to know.

My battle with the bulge has inspired others and, as so many have
thanked me for talking and writing about it, here is a night to be inspired and to be chastened for not treating your brothers and sisters in ways that help them look after God’s Temple! It is about more than eating less! The spiritual, emotional, social issues and the Christian way to help your brother and sister.

Dave Thompson and his team follow up their amazing night on Harry Potter with a look at CS Lewis’s Narnia. Geared for all ages from 8 upwards so note the time change!

Two Fitzers Anne Deighan and Ruth Gray have been on the Board of this amazing charity that works through film media with those with criminal records who are being isolated from society. Come watch and think.

A follow up to Stephen McIlwaine’s introduction in January. Our own Anne Deighan and Michael McRay, an American studying at ISE, will share their experiences of trips to Israel/Palestine on Peacemaking projects. We all want to hear Anne’s experiences and Michael was amazing when he read from his up and coming book at War and peace in November.