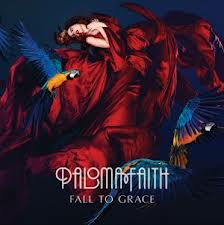 “I know a man who fills his emptiness

I know a girl who drinks herself to sleep at night

You can't change her

I know people who use chat rooms as confessionals

I know down and outs who once were,

Once they were professionals

Wipe it off your sleeve

Don't roll your eyes, my sweet

We all get desperate sometimes

I know you'll find it hard to accept it sometimes

We all feel black and we feel blue”

It should be no surprise that Paloma Faith would be on the radar of someone like me who looks for spirituality and depth in music.  With an album called “Fall To Grace” and songs like “Streets Of Glory” I was sure to be investigating. My colleague in Fitzroy, Jonathan Abernethy-Barkley has used “Black and Blue” a couple of times in Sunday morning prayers and it resonates. It is I guess Paloma’s “but for the grace of God there go I” and that thought is not just one that should carry sympathy towards those feeling black and blue but should also effect the judgement that we show towards such damaged souls. When we bring grace into the equation iot always
brings with it a deflation of any sense of superiority we might feel.

It is back to my often quoted theological gem from U2, “Grace, the name for a girl/And also a thought that can change the world.”  For those of us who follow Jesus grace is the key. This is the greatest idea in the world; that we could be loved by God, just as we are. This is the key to the door that Jesus opens by his life, death and resurrection. We are invited into a new redeemed relationship with
God not by what we do but by what Jesus has done and by God’s unconditional love towards us. Now that changes my world.

BUT, this grace is much more than a ticket into a new world, it is the life of the world we enter into. That grace changes the way we
look at the world and one another. We treat people with that same Christlike love. That changes everything. Sadly, that grace has been used by many down through Church history as a reason to feel superior when it should do the exact opposite, In engaging with God’s grace we recognise as the apostle Paul did that we are the worst of sinners. When we think of our neighbours or our enemies with that theological truth embedded in our means and living in our hearts then we will never look at those damaged balck and blue with any kind of
superiority. Grace... it changes the world!