Home Archives Profile Subscribe
TRIMMING THE TUBBIE TEMPLE - WEIGHT LOSS AND THE CHURCH
Lyric For The Day 31.1.13 from Black and Blue by Paloma Faith (and Grace by U2) 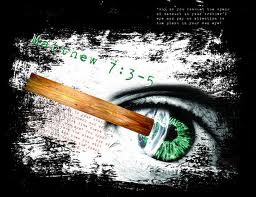 (found this old article that I wrote when I had a column in Ireland Today newspaper. Edited it a little)

There is a character in the movie Crash who sexually assaults a woman in one scene and then amazingly risks his own life to save her from a car wreck in another. On singer Anne McCue’s album Roll she sings “I wanted to be like Ghandi but turned out like Hitler”. One of my favourite Over The Rhine lyrics was, "You were 80% angel, 10% demon and the rest was hard to explain..." St. Paul wrote in his epistle to the Romans “I do not understand what I do. For what I want to do I do not do but what I hate I do.”

Christians believe that there are two marks in the heart of humanity. That first story in the Bible explains to us that we have the image of God but that our DNA also carried the mark of the fall. In a nutshell, humanity reached beyond itself to be more than we were and ended up less than we were intended to be. Both the Divine and fallen parts of our nature can reveal themselves in the tangled mix of being human.

For some reason when we come to confess our own fallen actions, which we probably don’t do enough, we seem to be able to hold on to these two sides of humanity as Paul did. However, when it comes to criticizing others we seem to leave the mark of Adam out. When we judge others we do so with an arrogant perfectionism that lacks in humility and betrays the truth of our complicated nature. This is
probably what Jesus was getting at when he said, “Why do you look at the speck of sawdust in someone else’s eye and pay no attention to the plank in your own eye.”

It is sad when we find such arrogant judgementalism at work in the Church. So often we set ourselves up as God to damn our brothers and sisters in the same graceless way that the Pharisees did. Likewise, in the perpetual never ending “Ground Hog days” of our faltering attempts at a peaceful future, here in Ireland, we need to stop being an island full of planks! Perhaps a lot of our relationships
personally and politically might change if we always sought out the divine mark in one another and in humility never miss the plank within ourselves.